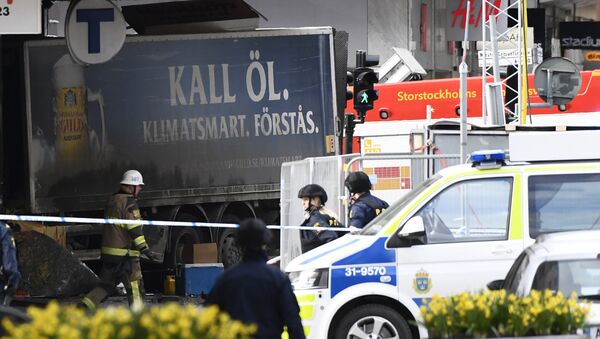 In several terrorist attacks performed across Europe, a connection between the perpetrators and Sweden has been established. Jihadist recruitment in the Nordic country has been made possible by politicians' reluctance to address the problem for fear of being labeled "racist," Swedish Defense College researcher Peder Hyllengren argued.

While Sweden, compared with other European countries, has been more or less spared from acts of terrorism (bar the recent vicious Stockholm attack and a suicide bombing in 2010), it has nevertheless functioned as a base camp for recruiting extremists, who have participated in or have been suspected of terrorist attacks abroad, National Defense College researcher Peder Hyllengren told broadcaster SVT.

In Hyllengren's own words, Sweden "sticks out" in terms of the presence of homegrown jihadists in international terrorist networks. Sweden, a nation of 10 million, has produced around 300 jihadists, which is second most in the EU in relation to the population. Additionally, hundreds of Swedes have built up contacts with violent jihadists from other countries and entered into various terrorist cells that have committed attacks around Europe.

According to Hyllengren, involvement in Islamic terrorism is not exactly a recent phenomenon, as Sweden has effectively functioned as a supplier of extremism for decades. From the Nordic country, people have been recruited to training camps to fight in conflict zones across the world, in places like Somalia, Pakistan and Afghanistan.

Sweden's Dilemma: 'Failed to React on Islamist Threat' to 'Avoid Racism Stigma'
Hyllengren argued that the issue of terrorism has become particularly sensitive since the first terrorist cases were initiated in the 2000s, which led to criticism of and mistrust towards the Security Police, SÄPO. According to Hyllengren, the activism that took place against the security officials and those who tried to emphasize the seriousness of these issues raised the threshold for politicians, effectively preventing them from addressing these problems as such.

"You risked being identified as racist in a way that you did not see in other European countries. There, this question was as uncontroversial as the importance of combating Nazism and right-wing extremism. But in Sweden it took a long time before we could discuss jihadism in the same way we have long discussed Nazism," Hyllengren concluded.

As a result, Hyllengren contended, Sweden became a "jihadi hot spot" because recruiters were granted opportunities to act relatively undisturbed, which "wasn't really seen in other European countries."

The most notorious cases are Osama Krayem and Mohamed Belkaid, who both went to Syria and were suspected of participating in the terrorist attacks in Paris 2015 and Brussels 2016. Krayem, who was born and raised in Malmö, and is currently awaiting prosecution. Belkaid, who had a residence permit in Sweden, was killed during a police raid in 2016.

Swedish citizens of foreign descent were also sentenced to various prison terms, ranging from several years to life imprisonment, in Greece, Bosnia and Herzegovina, Syria, Somalia, the US, Denmark and Morocco, SVT reported.