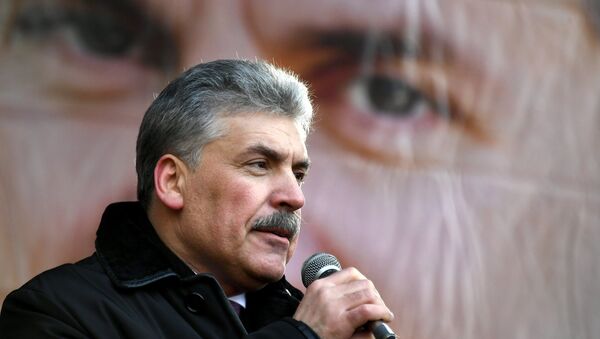 MOSCOW (Sputnik) - Russian presidential candidate Pavel Grudinin from the Communist Party admitted on Tuesday that if he were offered to become the Russian prime minister in the event of losing the presidential election, he would agree.

"I will agree to become prime minister if [the president] does not interfere in the economy, I will conduct nationalization, introduce a progressive tax scale, I will form a people's trust government of those people whom I believe… If you trust me as prime minister, then do not meddle in my affairs and in six months or a year the situation will change in the same way as during [former Prime Minister Yevgeny] Primakov's tenure," Grudinin said at a meeting with supporters in Novosibirsk.

'F*cking Wh*re': Presidential Candidate Gets 'Cooled' With Water During Debate
Asked whether opposition figure Alexey Navalny could head the anti-corruption fight at the state level, Grudinin proposed Yuri Boldyrev as his candidate to this position.

The Russian presidential election is scheduled for March 18. The campaign started in December 2017. Election campaigning in the media starts on February 17 and is due to end on March 17.