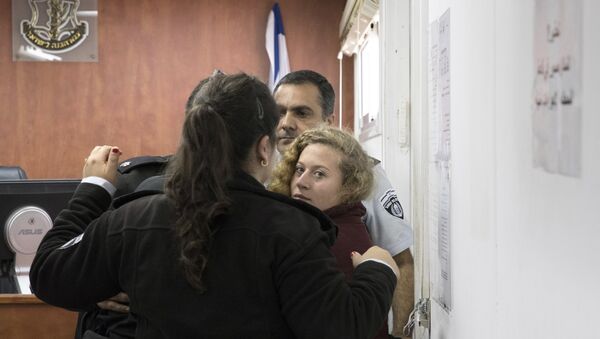 According to Amnesty International (AI), Israel, as party to the Convention on the Rights of the Child, failed to stay in line with the human rights treaty by opting to immediately detain Tamimi instead of seeking a better solution.

Per the treaty, the arrest, detention or imprisonment of a child must be used only as a last resort and for the shortest appropriate period of time. Tamimi was taken into custody in the middle of the night by Israeli forces three days after video footage was released of Tamimi's altercation with soldiers.

"By refusing to release Ahed Tamimi since her arrest on 19 December, the Israeli authorities have shown nothing but contempt for their obligations under international law to protect children," Magdalena Mughrabi, deputy director of AI's Middle East and Africa chapters, said in a statement. "As an unarmed girl, Ahed posed no threat during the altercation with the two Israeli soldiers who were heavily armed and wearing protective clothing."

"Nothing she has done can justify her continued detention and the long, aggressive interrogation sessions she has been forced to endure during the first two weeks of her detention," Mughrabi added, before pointing out that "yet again, the Israeli authorities have responded to acts of defiance by a Palestinian child with measures that are entirely disproportionate to the incident in question."

The statement from Amnesty International goes on to note that Tamimi's detention is not unique and that the Israeli army currently has roughly 350 Palestinian children in custody and is "subjecting them to ill-treatment, including blindfolding, threats, solitary confinement and interrogations without the presence of their lawyers or family members."

According to the December 2017 arrest warrant, Tamimi was taken into custody for participating in violent riots in the village of Nabi Saleh. However, video footage of the altercation shows that the then 16-year-old was simply yelling at, hitting and later slapping two Israeli soldiers away from the area after one of them had shoved her.

​Despite a push from Tamimi's family to have her trial open to the public, a judge rejected the proposal, ruling that it would not be in the interest of the teenager, who is being tried as a minor, Channel News Asia reported. Following the decision, all who remained in the courtroom were Tamimi's family after spectators were asked to leave.

"They understand that people outside Ofer military court are interested in Ahed's case, they understand that her rights are being infringed and her trial is something that shouldn't be happening," Gaby Lasky, Tamimi's lawyer, said in a statement after her proposal for an open trial was shot down. "So the way to keep it out of everybody's eyes is to close doors and not allow people inside the court for her hearing."

Though the Tuesday trial only lasted a few hours, it was ultimately brought to a close after prosecutors asked for more time to prepare their case. A new trial date has been scheduled for March 11.

Tamimi, who faces 12 charges including aggravated assault and incitement, could land in prison for 10 years if she is convicted.