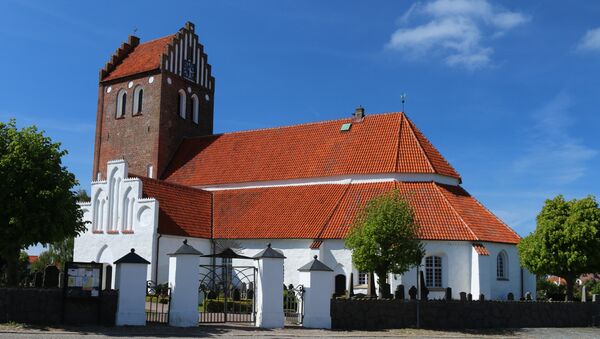 Despite the outpouring of anger on social media, neither the police, nor the church itself was willing to speculate on the motives behind the graffiti that alienated many Swedes.

The Church of Mary in the town of Båstad, Skåne County was sprayed with "Allahu Akbar," an Arabic phrase known as Takbir, literally meaning "God is Greater" and used in many contexts, including prayers, but often associated with Islamist terrorism, the local Helsingborgs Dagblad reported.

The local police have so far been unable to establish either the culprits behind the act of vandalism or the motive. According to Helsingborgs Dagblad, the police were also reluctant to speculate whether the graffiti was genuine or an attempt to spread prejudice against Islam.

Although provoking an outcry on social media, it took the story almost a week to reach mainstream Swedish media.

"Recently we could read about someone who drew a swastika in the snow at the school in Östra Karup, which was reported as incitement of racial hatred. However, it's remarkably quiet when the Båstad church was vandalized with 'Allahu Akbar.' And of course hate crime is not even discussed here. Not even a short story was it worth," user Bill Person wrote.

Local woman Carolin Gräbner, who has an emotional attachment to the church, is among those who have seen the scrawls with their own eyes and reacted strongly.

"I became angry, sad and disappointed. My son and father are buried there, and it should be a tranquil place to mourn one's relatives. Seeing the church vandalized gets you upset. This is going too far. You don't do this sort of stuff to a church," Gräbner told the Expressen daily when the story finally reached national level.

Previously, the image of the vandalized church published by Gräbner prompted an outcry on her Facebook page.

"Imagine writing this on a church while Christians are the largest group of people suffering persecution. This should be reported as incitement to hatred," user Linda Efraimsson wrote.

Another user, however, parried that posting such pictures in itself constituted "incitement to hatred," arguing that it "didn't take much wit to comprehend it."

"If you had done something like this to a mosque in, say, Saudi Arabia, you could be quite sure that you would be punished quite severely. But here in Sweden we aren't even expected to vent our frustration and anger over people vandalizing our sacred buildings. We'll just go out and 'love-bomb.' Grow up!" Jan-Erik Carlsson wrote.

The church reportedly had trouble removing the scribble, as a steel brush proved insufficient. By Gräbner's own admission, a brown stain was visible on the façade, and the inscription could still be read.

Church officials, too, refused to ponder the motive, stating that all acts of vandalism were equally unacceptable in a church building.

"First, we don't know who did this, and we don't want to speculate about it. We take it for what it is, graffiti," local pastor Sören Trygg told the Christian newspaper Dagen. "Some people have been sad, others upset. Unfortunately, there are also people who have used it for their own purpose and interpreted it their own way," he commented, regarding the growing anger on social media.

Built in the 1400s during Danish rule, the church of Mary is one of the foremost sights of Båstad, a town of 5,000.