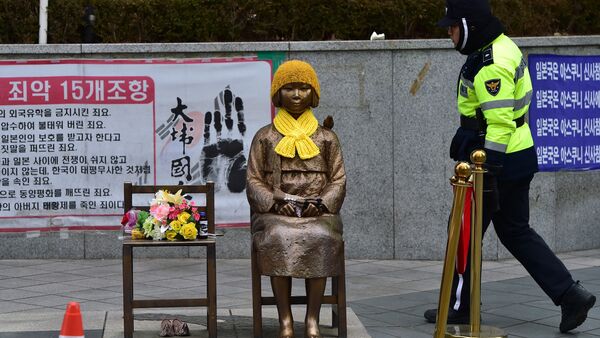 "The state viewed the right for sexual self-determination and, moreover, the very personality of the plaintiffs, expressed in their sex, as a tool to achieve state targets and thus violated its commitment to respect human rights," the Seoul High Court ruling from February 8 reads. The court ruled that the government must pay compensation to 117 "comfort women" who filed a lawsuit against the Republic of Korea.

"As follows from the official documents of the Ministry of Health, [the state] actively demanded that ‘comfort women' who live in proximity of US military bases provide ‘polite services,' which effectively means prostitution, so that foreign military personnel could relax and easily enjoy ‘comfort  women' services," the ruling reads.

IFRC Releases $323,782 From Emergency Fund to Help Fight Influenza in N Korea
"The settlements located in the vicinity of military bases were managed with the aim or intention to mobilize ‘comfort women,' so that, by ‘raising and cementing the spirit' of foreign soldiers, a military union, required to ensure the state security, can be upheld — and also in pursuit of economical aims, such as foreign currency acquisition."

In addition, the South Korean government encouraged and advocated sex work by developing the required infrastructure and by conducting "patriotic education" that stated that girls who trade their bodies for currency are true patriots.

"The state also directly violated the personal inviolability and other basic rights, as, under pretext of curing of venereal diseases, it ‘suppressed' [apprehended] and ‘deciphered the infected' [when people were sent to isolation facilities by pointing of foreign soldiers who caught the sexually transmitted diseases]," the ruling reads.

"Those people were forcefully sent to [medical] isolation facilities or they were indiscriminately treated with penicillin, which can potentially cause major physical side effects."

This is the first case in which the South Korean government has officially been ruled responsible for prostitution in settlements located near US military bases, which all started in the 1950s.

In a January 2017 ruling by the Seoul Central District Court, 5 million won was ordered paid to only 57 out of 120 plaintiffs, acknowledging the state's guilt only in the act of forcefully putting "comfort women" in isolation facilities before a corresponding act on prevention of infection diseases was enacted on August 19, 1977.

However, this time, a higher court acknowledged both psychological and physical damage to the victims regardless of any legislation timeframe.

"The Republic of Korea, as defendant, of course, may appeal, but we, together with the plaintiffs, ask them not to do that," Ha Joo-hee, a lawyer from the Hyangbeop law firm commented to Sputnik.

This company, which is a member of the Lawyers for a Democratic Society (Minbyun), has achieved historical rulings on other major cases connected to US forces in South Korea, such as environment pollution on US Army bases, murders conducted by US military personnel and others.