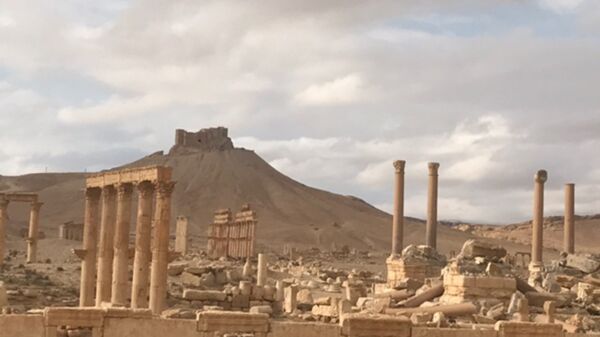 MOSCOW (Sputnik) - The Russian Foreign Ministry has no information about Iran having a military base near the Syrian city of Palmyra, Russian Deputy Foreign Minister Mikhail Bogdanov said Monday.

“No, I do not have such information,” Bogdanov told reporters when asked whether Moscow was aware of Iran’s  military base near Palmyra.

Speaking further, the senior official noted that Russia was urging to avoid the escalation of tensions in the region after Israel's strikes on Syria.

“We call on everyone to be calm, to prevent a very dangerous escalation in countries of the region,” Bogdanov told reporters.

The statement comes several days after Israeli Defense Forces released footage allegedly showing the downing of an Iranian drone by an Israeli attack helicopter and the subsequent airstrike against it on the Syrian soil.

Iran Presented New Missiles During Islamic Revolution Celebrations - Reports
Commenting on the situation, US State Department spokeswoman Heather Nauert said that the US considered the incident to be Iran's "calculated escalation" of tension.

At the same time, Iran dubbed Israel's reports of a downed drone "ridiculous," saying that the Islamic Republic had only an "advisory, not a military presence" in Syria.

Iran has already been accused by Israel, the US and some of their allies of providing arms to the Hezbollah movement that is fighting terrorists alongside the Syrian army. Tehran has denied the claims, though admitted its political support for the Shiite movement.