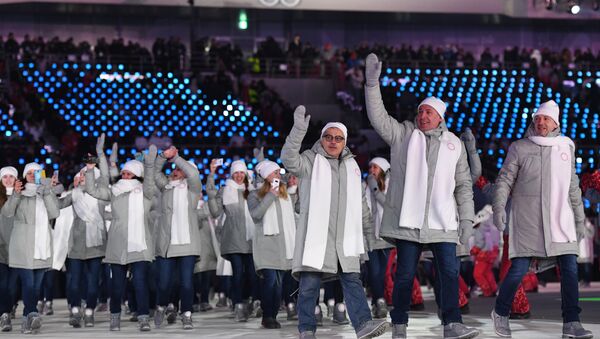 © AFP 2023 / Kirill KUDRYAVTSEV
Subscribe
International
India
Africa
It looks like for some athletes genuine sportsmanship and Olympic camaraderie are taking a back seat to hostility and political intrigues.

Some US and British athletes are refusing to shake hands with their Russian colleagues taking part in the Winter Olympics in South Korea’s Pyeongchang, Russian skeleton athlete Nikita Tregubov has told Sport Express.

“They don’t say hello and neither do I. No sweat. Why? I don’t know. I don’t give a heck,” Tregubov added.

He said that this is exactly the kind of attitude Russian athletes had earlier experienced during the skeleton World Cup in January. He also sees political undertones behind the Western athletes’ hostile behavior.

'Dangerous Times': Journalist Worried by 'Bias and Politicization' of Olympics
In December 2017, the International Olympic Committee handed down lifetime disqualifications for a number of Russian athletes for their alleged use of banned substances during the 2014 Winter Games in Sochi.

Later, most of the sanctioned Russian athletes were either fully or partially cleared by the Court of Arbitration for Sport (CAS), but the IOC still refused to send out invitations for the exonerated Russian athletes to come to Pyeongchang.

The 23rd Winter Olympics will run until February 25.

READ MORE: About 800 People Protesting in Seoul Against N Korea's Participation in Olympics