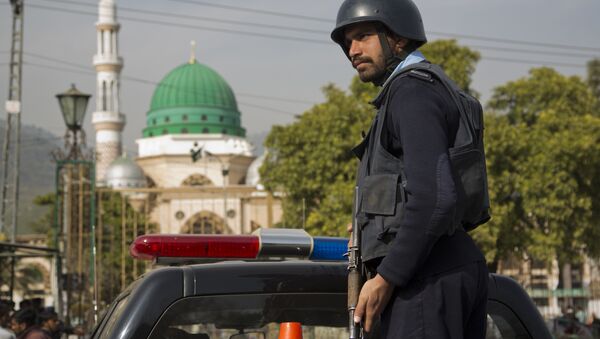 © AP Photo / B.K. Bangash
Subscribe
International
India
Africa
BRUSSELS (Sputnik) – The radicalization of Muslim police and military personnel has become one of the major fears for governments in Europe as repeated cases have emerged over the past years of such security officers supporting Islamists on the continent.

The latest high-profile case proving that even police have not been immune to radicalization and fundamentalism was revealed in January when French security services managed to foil a terrorist attack, plotted by a former policeman.

Many Muslims have recently joined the armed forces and law enforcement in other EU countries with large Muslim populations as well, such as Belgium, Germany, the Netherlands and the United Kingdom.

The situation has resulted in a looming danger that more people can be radicalized and use their knowledge, access to security data, and training to help Islamists by procuring weapons for them, training them, or simply informing them about ongoing surveillance or other security activities.

Some of Europe's populist parties refer to such radicalized security officers as a "fifth column" in Europe, adding that recruitment in security services should be much more selective.

On January 20, French media reported that the country’s intelligence services had thwarted what could have been this year's first terrorist attack in France. A 33-year-old former policeman who had pledged allegiance to the Daesh terrorist group (banned in Russia) in an online video in front of a Daesh flag was said to have been arrested on January 16 in Bagnols-Sur-Ceze region in connection with the attack attempt.

It was revealed that the suspect had undergone a nine-week weapons training program and served in a police unit in southwestern France for several months in the second half of 2017 before resigning. At his apartment, the security services reportedly found items which can be used to produce an explosive device.

Similar cases were recorded in France in the previous year. In March 2017, policewoman Ahlam El Haddad was found to have abused her access to judicial profiles and confidential information while being involved in a jihadist recruitment circle. El Haddad was subsequently convicted and given a five-year prison sentence.

Several months later in June 2017, a police officer named Mamadou N. was arrested in front of his colleagues at the Le Kremlin-Bicetre police station in Paris suburbs.

According to local media, the man has been suspected of aiding his brother who was involved in a cell that helped people travel to the Middle East to fight along jihadists. French intelligence services reportedly believe that Mamadou could view police files and use fake documents for criminal purposes. The police also found out that the suspect published IS propaganda on the Internet and approved of the 2016 assassination of two policemen in the French region of Yvelines. Mamadou’s trial is currently pending.

The fact that radicalization within the French police ranks has turned into a matter of concern is underpinned by statistics. According to the French Ministry of Interior, 20 out of the country's 150,000 policemen are under surveillance by the authorities on suspicion of supporting Islamists, while Romain Caillet, a historian specializing in Islamic terrorism and author of the book "Combat Was Prescribed to You" on jihadism in France, finds this figures to be "much below reality."

In a bid to tackle the issue of radicalization of Muslim police officers, the French parliament in October 2017 approved a new anti-terror law enabling, among other things, to launch an administrative inquiry into an officer "to check whether their behavior has become incompatible with their duties." If this turns out to be the case, the police officer can be transferred to another position or simply fired.

The legislation, however, has not been implemented effectively so far, a police chief in one of Paris' suburbs told Sputnik. Having noticed a radical change in the behavior of one of his secondaries after a long leave of absence, he faced difficulties in finding an official in charge to whom he could report such concerns.

"He was not going out and having fun anymore; he had become very religious and his forehead showed a 'prayer bump.' But I could not find anybody in the hierarchy to share my doubts," the police chief said.

According to media reports, another French policeman tried to recover the car of his arrested brother, with an IS flag inside. Though it was subsequently revealed that the same policeman spent nights using his access to false identities on the police computers, and broke his telephone chips with his brother so that their communication could not be traced by investigators, he was not fired.

After being suspended due to an internal investigation, the police officer was restored to his position, since the French security services did not believe his case to be serious enough to even have him transferred to another job.

Belgium, being a major source of "foreign fighters" in Syria and Iraq among EU countries, also aims to prevent the radicalization of police and army officers, first of all through screening.

In June 2016, Belgian Minister of Defense Steven Vandeput admitted in parliament that the army’s intelligence service had discreetly put 60 Muslim servicemen, including five sergeants, under surveillance for radicalization. Vanderput then mentioned that several Belgian ex-military officers had gone to fight on the side of the IS in Syria.

"Candidates for a career in defense are monitored for crimes and radicalization, so the dubious types can be eliminated. But it is much more difficult to fire a military officer on basis of extreme opinions. We know them and follow them. If their actions become unacceptable, we intervene," Vandeput said.

Belgian Minister of Interior Olivier Van Raemdonck noted, in a comment to Sputnik, that screening of candidates to join security forces cannot guarantee that police officer would not be radicalized later.

"We are very tough with the ‘screening’ at the recruitment level, but also understand that some can radicalize later in their active lives. People of foreign origin are welcome in the police force, which must be a reflection of society, and religious freedom is a reality, but Islamism cannot be tolerated," the Belgian minister told Sputnik.

Nicola Tournay, communications director for the Belgian People's Party (Parti Populaire, PP), told Sputnik that simple screening is not enough to tackle the threat of radicalized Muslims joining security forces, which is an issue of major concern as several EU nations plan to boost police. For example, France plans to recruit thousands of police officers by 2022, and Belgium intends to recruit hundreds in the wake of terrorist attacks that hit Europe over past years.

"All European countries need to be more rigorous in their recruitment and each file must be examined in detail; the inquiry must be extended to the family of the candidate. It is not enough – as is often the case now – to sift the name of the candidates through the listings of unsavory characters or terrorists. There must also be an extensive interview done by specialists," Tournay said.

The politician also suggested that it was important for defense and police forces to consider the possibility of starting an inquiry into a member of the force at any point when doubt arises about his or her activities.