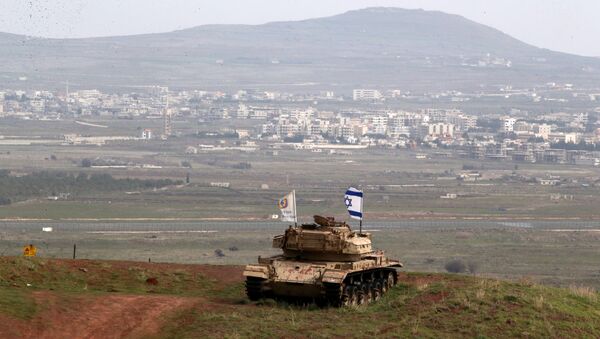 © REUTERS / Ammar Awad
Subscribe
On Saturday, Israel conducted what it described as its largest strikes in Syria in decades following the weekend downing of its fighter jet over northern Israel. Sputnik discussed the escalating tensions with James Dorsey, senior fellow at the S. Rajaratnam School of International Studies in Singapore and an award-winning foreign correspondent.

James Dorsey: I think you're seeing three major things. First of all you're seeing the shaping up of a battle for the future of Syria and who will play a role there and what that role will be. It's very clear that the Israelis backed by the Americans are determined to limit the Iranian role there. You've obviously have had a major military development for the first time since 1982, the Syrians have downed an Israeli jet, but by the same token the Israelis have since carried out airstrikes above Syria, or against Syrian targets and apparently the Syrians did not respond to that, and that's probably because of Russia's efforts to try and get some restraint and keep the situation under control.

Sputnik: Now what are the chances that this situation would lead to further confrontation, what are your thoughts on that, does it look likely?

James Dorsey: Well I think it certainly has that potential and a lot will depend on the maneuvering that goes on and, in fact, a lot will depend on the Russian relationship, primarily, with Iran, so in other words, Israel has concerns and the Americans have concerns with regard to Iran, and those concerns are not going to be easily allayed. On the other hand, Russia is able to caution and persuade its allies a degree of restraint, which would also probably lead to restraint on the Israeli side, but the potential for anything going wrong by design or by default is considerable.

READ MORE: Russia Is the One to Curb Israel-Iran-Syria Crisis, Not US – Netanyahu's Deputy

Sputnik: Why do you think Israel is now, at this present moment, stepping up its activity of all time?

Moscow Concerned With Escalation of Tensions as Israel Attacks Syria
James Dorsey: There's obviously a lot of speculation in some circles that this has a lot to do with Israeli domestic politics and the fact that there are various criminal investigations against the Prime Minister, the argument then would be that this was one way of trying to bolster his domestic position, that may or may not be true, but even if it were true I think it would be a fallacy to underestimate the Israeli resistance to an Iranian presence or a very strong Iranian presence particularly closer to its borders in Syria. You would have tensions over the Iranian presence irrespective of what the domestic situation in Israel is.

Sputnik: What's your assesment regarding Israel's fears of the Iranian threat, are they really that valid?

James Dorsey: I don't think that Iran, per se, is looking for a military confrontation with Israel, but on the other hand, given the statements that have been coming out of Tehran for many years, the Israelis have no reason not be concerned of course. Iran does not recognize Israel, Iran has called for the replacement of Israel by some other kind of state that would involve both Israelis and Palestinians but no longer be a Jewish state, and you also have in the past, although not more recently the questioning of the Holocaust by Iran, so in other words Israel has legitimate concerns, those concerns may or may not be overstated, but nonetheless, I think there is a degree of legitimacy there, that is not to say that there's not a lot of legitimate criticism to be made of Israeli policies.

Sputnik: Now the recent comments regarding the situation here, from both Moscow and Washington, are understandably different. Washington has called the incident on the Israeli-Syrian border Iran's “calculated escalation,” what's your take on this, do you think the US could use the situation as a pretext to exert even more pressure on Tehran now, I would've thought that's what their intention is, or is Washington playing some other card here?

James Dorsey: No, I think there's no question about the fact that certainly President Trump is on the war path against Iran if you wish, in other words he wants to see a serious curtailment of Iranian military power as well as its regional influence and will portray what happened as an indication of Iranian aggression whether or not it was that, and the Israelis will obviously back that view simply because it serves their interests both in terms of trying to contain Iran, as well as the fact that Israel views Iran as the most existential threat to its national security at this point, and at the same time helps create an atmosphere which is conducive to a push to reduce Iranian influence in Syria.

Sputnik: The leader of the Moscow platform of the Syrian opposition has called the Israeli airstrikes an attempt to prevent political settlement in the war-torn country. What's your opinion on that and what implications might it have on the peace process, it's only going to slow it down, isn't it really?

James Dorsey: First of all I don't think it's going to affect the peace process as such. What I do think, however, is that it's a very fragile peace process to start with, and it's not yet clear that Syria as a nation state is going to survive. And I would think that from the Israeli perspective an unstable Syria is not what the Israelis want. Let's not forget that for much of the last three decades the border between Israel and Syria has been a very stable border and it's become a less stable border since the eruption of the civil war seven years ago. I think that what you’re seeing, it's true for Israel, it's true for the United States, it's true for Russia, it's true for Iran, it's true for the Assad government, you're seeing the beginnings of the battle of what the future Syria is going to look like.

The views expressed in this article by James Dorsey are solely those of the speaker and do not necessarily reflect the position of Sputnik.

000000
Popular comments
Israel is in no danger, Netanyahoo on the other hand is going to prison for corruption which always means they need a war to distract the public.