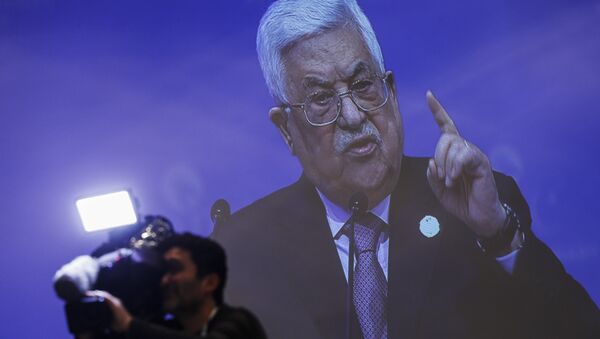 MOSCOW (Sputnik) - Palestine does not want the United States to be the sole mediator in the Middle East negotiations, Palestinian leader Mahmoud Abbas said Monday.

"In this current atmosphere created by the actions of the United States, we declare that starting from now, we refuse to cooperate in any way with the Americans as mediators, as we oppose their actions," Abbas said at talks with Russian President Vladimir Putin in Moscow.

Abbas stressed that if an international event (on Israeli-Palestinian conflict settlement) takes place, Palestine asks that its result be the creation of such a mechanism, in which the United States will not be the only mediator, but part of a group of mediators.

"We agree, we do not have any objections against a multilateral format of mediation, for example, the 'Quartet' plus some other countries like it was done with the Iran deal," he said.

The Jerusalem problem is the cornerstone of the Israeli-Palestinian conflict. The ancient city has been disputed ever since the foundation of Israel and the first Israeli-Arab war in 1948. The city was then separated into the Western and Eastern parts with the first one becoming a part of Israel and the second one being viewed as the capital of future Palestine.

The conflict over the disputed territory has further escalated after the US President Donald Trump's controversial December 6 decision to recognize it as Israeli capital and to move the country's embassy there. This move was, however, rejected by the UN resolution.

Israel seized the eastern part of the city in 1967 and recognize the "undivided" city of Jerusalem as Israel's capital.