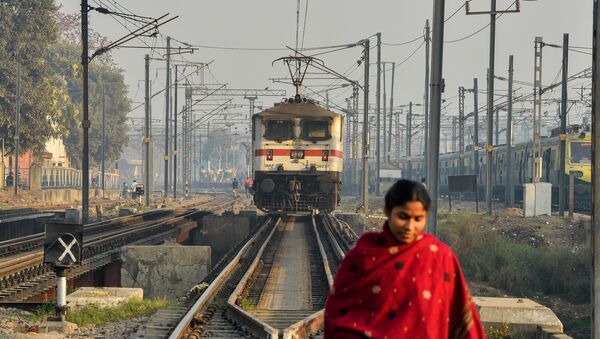 New Delhi (Sputnik) — India's Ministry of Railways has categorically stated that domestic companies would be entitled to the lion's share of supply contracts in the country's first bullet train project.

"Japanese component of the project is estimated to be about 18.6% of the total project cost. Make in India is an integral part of the project," Rajen Gohain, India's Minister of State for Railways said in his reply to a question posed by a member of parliament on the basis of a news report published by Reuters last month.

Did Reuters Circulate a Misleading and Factually Incorrect Story on Bullet Train and Make in India? https://t.co/eRvtmh12Rf via @the_truepicture

On 18 January 2018, a Reuters report had suggested that Japanese companies would supply at least 70 percent of core components for India's first Bullet train and rail track, undermining a key component of Prime Minister Narendra Modi's economic policy — a push to "Make in India."

"Japan is funding most of the project, and Japanese companies are likely to supply at least 70 percent of the core components of the rail line, said five sources in New Delhi with direct knowledge of the matter," the Reuters report read.

Asia
India to Get Its First Japanese-Modeled Bullet Train by 2022
A joint Indian and Japanese task force on Make in India and transfer of technology under the Mumbai-Ahmedabad High-Speed Rail (MAHSR) Project has been constituted to provide a platform for Indian and Japanese companies to come together and facilitate tie-ups by way of formation of the joint venture and transfer of technology.

The task force and its four subgroups constituted for civil works, track, rolling stock and electrical and system areas have held several meetings in this regard, according to Minister Gohain.

"Indian companies will carry out the construction of bridges and structures for the elevated rail, which will amount to more than half the cost," Gohain said.

Indian steelmaker Jindal Steel & Power Ltd has set up a plant capable of producing 30,000 MT of rails per month for bullet trains in a technical collaboration with the German company SMS MEER. India's Cement Manufacturers Association also hopes to cash in on the bullet train project, as they claim they currently have a surplus capacity of at least $9 billion worth of cement.

The Indian government has set a target to complete the bullet train project between Ahmedabad and Mumbai by the year 2023. The 508-kilometer long project will have a maximum design speed of 350 kilometers per hour and the journey time between Mumbai and Sabarmati in Ahmedabad will be 2.07 hours.

81 percent of the estimated cost is funded by the government of Japan at an interest rate of 0.1%, with a repayment period of 50 years and a 15 years grace period.