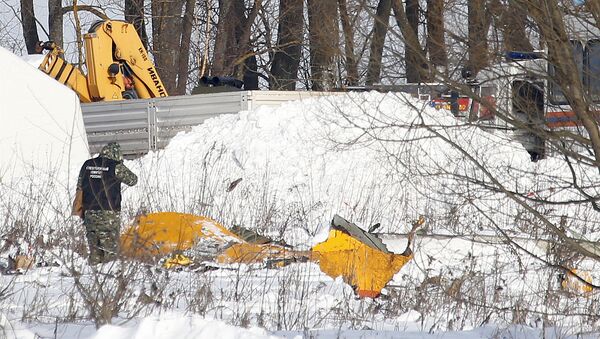 The An-148 passenger plane, carrying out a domestic flight, crashed in the Moscow Region on Sunday, all 71 people aboard were found dead. The reasons for the crash are still being investigated.

"It has been found out that at the time the aircraft fell it was intact, there was no fire, the explosion took place after the crash," Russian Investigative Committee spokeswoman Svetlana Petrenko told reporters commenting on the possible reasons behind the crash.

The spokeswoman added that the search for and removal of documents had been carried out in the office of Saratov Airlines, which conducted the flight. She noted that fuel samples, the records of radio communications between air traffic controllers and aircraft commander, files with aircraft tracking on the ground and in the air, electronic records of radar flight indicators had been seized, while the necessary forensic examinations had been scheduled.

Black Box Recovered From Russia's An-148 Crash Site Near Moscow (PHOTO)
The Russian Emergencies Ministry has told RIA Novosti that 209 human body fragments had been found at the An-148 crash site near Moscow. Currently there are 532 people and over 100 units of specialized equipment working at the crash site. They have already found the plane’s two flight recorders.

The An-148 passenger plane, carrying out a domestic flight, crashed near Moscow 33 km from the airport on Sunday, claiming lives of all 65 passengers onboard and six crew members. Communications with the plane routing it to the city of Orsk in southwestern Russia were lost a few minutes after takeoff from Moscow's Domodedovo airport. The wreckage of the plane is spread over a wide area.