China Ready to Work With US on Denuclearization of Korean Peninsula 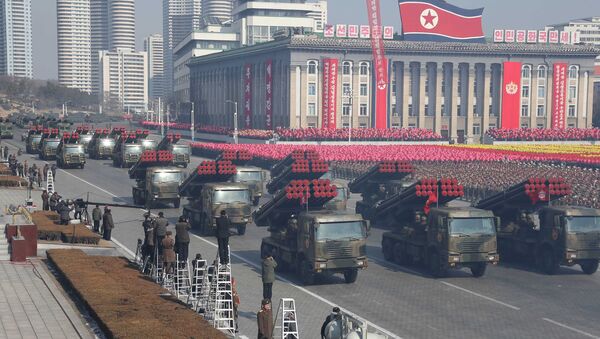 The Chinese foreign ministry reiterated Beijing's position on the denuclearization of the Korean Peninsula.

China's Foreign Ministry on Sunday published a note about the results of the visit of its State Councilor Yang Jiechi to the United States on February 8-9, where he held talks with US President Donald Trump and Secretary of State Rex Tillerson.

According to the ministry, Yang Jiechi reiterated China's position on the issue during meetings with US top officials.

"China is ready to work with the US on the basis of mutual respect and mutual trust to strengthen coordination and communication to jointly promote the settlement of the Korean Peninsula problem properly," Yang said in Washington.

As the ministry underlined, the global community should support the improvement of relations between Seoul and Pyongyang and the continued reduction in tensions on the peninsula, which is currently being observed.

The statement was made after the US promise to introduce its "toughest and most aggressive" round of economic sanctions to ensure the denuclearization against North Korea, US Vice President Mike Pence revealed on February 7.

Despite China, as well as Russia, having backed the UN sanctions against North Korea, they have repeatedly called for the consideration of the so-called "double freeze" plan, aimed at settling the situation on the peninsula, which urges Pyongyang to halt nuclear activities and calls on Washington and Seoul to refrain from joint military drills.

North Korea has been subject to several rounds of UNSC sanctions, with member states unanimously voting in favor of a US-drafted resolution to introduce new restrictions as a part of an effort to bring a halt to the country's continued ballistic missile tests on December 22, 2017. Multiple provisions in the resolution sanctioned North Korea's oil and petroleum industries, a move harshly slammed by Pyongyang.