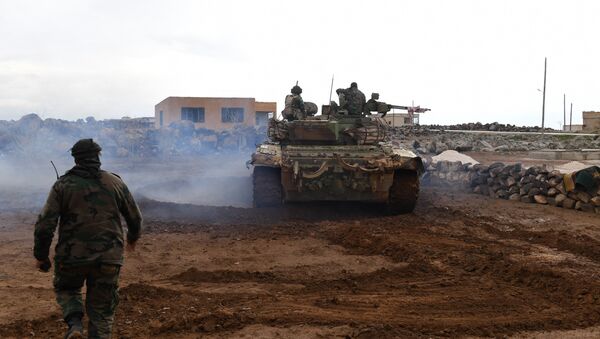 DAMASCUS (Sputnik) - The Syrian army has completely cleared Hama and Aleppo provinces of Daesh terrorists, the Syrian army said in a statement on Friday.

"The Syrian army, together with the allied forces, has liberated a large number of settlements in Hama, Aleppo and Idlib provinces… This is a strategic success, since it means a complete purge of Hama and Aleppo provinces of Islamic State group, as well as the elimination of the majority of the Nusra Front militants in the south of Aleppo province," the army statement, quoted by the state-run SANA news agency, said.

WATCH Turkish Military Vehicles Enter Syria's Aleppo
Earlier, a source familiar with the situation reported that the Syrian Army have managed to expel terrorists from the majority of villages and settlements in south-east of the Syrian province of Aleppo.

In December, another source told Sputnik that some 100 people, both militants and civilians, who cooperated with them, surrendered to the Syrian authorities within the framework of the program of national reconciliation.