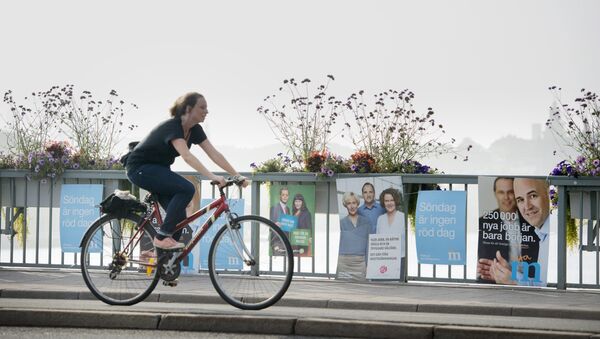 According to the most vociferous critics, Conservatives' use of "Trump's rhetoric" suggests that the Nordic country actually has "no-go" zones, whose very existence the Swedish government denies.

The election campaign of the Conservatives, currently the largest opposition party in Sweden, has triggered strong reactions in the Nordic nation. Many Swedes were particularly uncomfortable with the Conservatives' slogan "Only Go-Zones in Stockholm."

The Conservatives' recently-launched campaign #slutsnackat ("‘Nuff Said") aimed at perfecting security and improving the public image of the police, features sharp mottos, such as "Tack the Police" (a macaronic catchphrase translating from "Swenglish" as "Thank the Police," but with a clear nod to "F*ck the Police," a notorious hip-hip song by NWA).

​Another provocative Conservative slogan is "Aina ska med," which mocks an old catchphrase used by their arch-nemesis the Social Democrats "Alla ska med" ("All shall join in"). Only it uses a contemporary urban slur for the police, "aina," which made its way into Swedish from the Turkish language.

​However, their campaign arguably peaked with the slogan "Only Go-Zones in Stockholm," referring to the numerous blighted areas, often referred to as "no-go zones," or "vulnerable areas," as the Swedish "red-green" government prefers to call them. Unlike neighboring Denmark, which has no qualms about calling the troubled areas "ghettos" and even maintains an official "ghetto list," Sweden vehemently denies that they exist.

​According to a recent police count from 2017, there were 61 blighted areas across Sweden, of which 23 were ranked as "particularly vulnerable," 26 as "vulnerable" and another 6 as "risk zones," Swedish national broadcaster SVT reported. Sweden's three largest cities alone reportedly had over 800 youths involved in criminal gangs, according to Swedish Radio.

Following the campaign, the Conservatives were accused of using "symbol-laden" and "stigmatizing" code language, as well as "flirting with right-wing populism" by, among others, the Kultwatch outlet, which describes itself as "feminist" and "decolonized."

Ali Khalil of the Green Party, the Social Democrats' sidekick in the incumbent government, accused the Conservatives of "fear-mongering" and "blackmailing Swedes" by providing a picture, in which "everything is broken," the local news outlet Stockholm Direkt reported.

"The recent development has prompted many Stockholmers to ask themselves 'how could this possibly happen?'" Thorsson told Stockholm Direkt. By his own admission, the campaign is designed to "signal hopefulness," as the Conservatives believe that the problems, such as rampant gang crime, may be solved.

Linguistics specialist Felix Hultin of Stockholm University argued that the very term "no-go zone" stemmed from "US Conservative propaganda a-la Trump." In an opinion piece published in the Dagens Nyheter daily newspaper, Hultin argued that such parlance was "totally false" and "deeply insulting against locals." He claimed that equating troubled suburbs with warzones was bad taste and signaled how far the Conservatives were ready to go to win votes.

Leftist online mocked the Conservatives' campaign by replacing the letters in their slogans with total gibberish, while retaining their design.

​The Conservatives, who are also known by the Swedish name of Moderates, are a major player in Swedish politics. After several stints at the helm of Sweden in the 1990s and the 2000s, the party is currently in opposition, having won 23.3 percent of the vote in the 2014 general election.