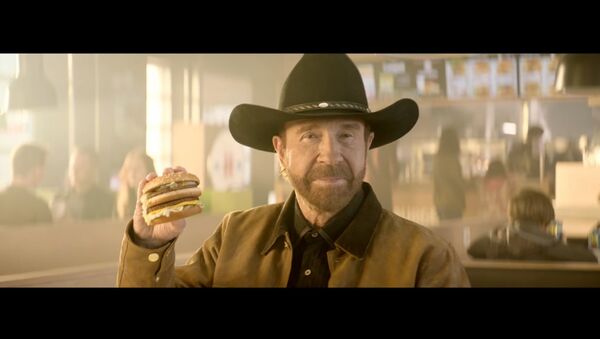 © Photo : YouTube/Hesburger Finland
Subscribe
The famed martial artist and internet legend stunned Suomi (in a good way, that is) by starring in a commercial for the local fast food chain Hesburger.

Chuck Norris was first seen at one of the restaurants in Helsinki earlier this week, prompting flabbergasted Finns into a deep think over the purpose of his visit. Later, Norris was revealed to have flown to Finland for a star appearance in a commercial to be aired on TV and in cinemas this spring, the Finnish daily Ilta-Sanomat reported.

The Finnish fast food chain Hesburger now has the distinction of having an almost-mythological martial artist as the face of the company. Norris left his autograph inside one of the Hesburger venues in the Mänttyniemi district in memory of his visit. The company celebrated the arrival of Norris by posting a three-second teaser on Facebook and Twitter, in which the spry-looking 77-year-old in cowboy clothes holds a hamburger in his hand and says: "Hesburger is Chuck Norris-approved."

​"All the more reasons to go to Hesburger," an elated user wrote on Hesburger's Facebook page.

"I came to Finland in 1984 for the premiere of my film, and it was fun," Norris was quoted as saying by Hesburger's press-service.

After having made a name for himselfas a martial artist, Hollywood star and writer, Norris resurfaced in the 2000s as an internet hero. He was featured in "Chuck Norris facts," comical factoids which became wide-spread in popular culture and are still going strong.

Chuck Norris had to stop washing his clothes in the ocean. The tsunamis were killing people.

Chuck Norris shot the sheriff, but he round house kicked the deputy.

​"Chuch Norris memes are a compliment. They connected me to the younger generation," Norris said, conveying his regards to his Finnish fans.

Founded in 1966 by Heikki "Hese" Salmela, Turku-based Hesburger is the largest fast food restaurants chain in Finland and the Baltic States, outrivaling US-based McDonalds in these countries.

This is not the only time when celebrities have advertised Finnish companies' products. In 2016, the late Motörhead frontman Lemmy Kilmister, who steered his band for many decades, "returned from the dead" for a commercial aired by the dairy giant Valio.

​In 2010, actress Pamela Anderson starred in a Nokia commercial; the racy casting ad featured the very same Anderson in her underwear.