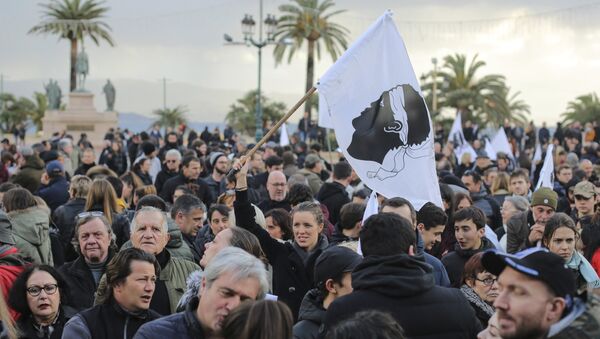 Corsica is persistent in its calls for greater autonomy from Paris, and what could help resolve the issue is more attention from the federal government to the demands of the region, Dr Russell Foster from the Department of European & International Studies at Kings College London, told Sputnik in an interview.

Sputnik: Some of the advances for the Corsicans were to recognize the language. Why is he [the president of the Corsica Libera faction in the Corsican legislative body Pierre-Antoine Tomasi] so steadfast about it?

Corsica May Keep Rallying for More Autonomy Despite Paris' Resistance

Dr Russell Foster: The Corsican nationalists are making two different types of demands: we could call them rational and irrational. The first one, the rational demands, these would be for a greater control over the local taxes, which is not unusual by any stretch of imagination.

And a residency agreement is only selling property to the people of Corsica because the Corsicans are worried because their island’s properties are being bought as holiday homes.

So, it’s pushing up rent, pushing up prices and makes it very difficult for native Corsicans to buy property, because so many properties are being sold to rich foreigners, who are there for only one or two weeks a year. These are rational wants, these can be dealt with through negotiations.

Irrational demands are things like language concerns, so, giving the Corsican language a degree of independence. We might think that this is an unusual demand, but let’s not forget that in the west at the moment there is general dissatisfaction towards the general political status quo, and identity politics are becoming more and more significant in western nations.

So, something like giving the Corsican language a legal status – it might seem a strange demand – but it’s part of this general concern that people’s identities are being eroded.

Sputnik: So, things are very, very rational. Why does he have a problem with the whole issue of "who can buy land on this small island?"

Dr Russell Foster: This is a concern as I said because Corsica is becoming a somewhat trendy upmarket holiday destination for the jet-set and the western European elite. And Corsica is by far the poorest region of France, it’s very very, very poor, because it’s largely been ignored by Paris over the last few decades.

Sputnik: Do you see any chance of Corsica receiving any degree of greater autonomy?

Dr Russell Foster: I think that they will receive some rational autonomy. And there are some Corsicans who want independence, but because Corsica is so poor it wouldn’t be able to survive as an independent nation.

This is why it was sold to France in 1768, because the Genoese couldn’t pay for it any more. And otherwise Catalonia or Scotland, which are wealthy and would be able to survive on their own, independently, Corsica doesn’t have the capacity for an independent economy.

So they don’t want independence, they want greater autonomy and greater control over their rights. Now, with rational things like tax control or with residency, this is something that the French government could give.

Although it’s technically possible I find it very unlikely that Emmanuel Macron is going to do this. Because his popularity rating is so low, because France and Europe in general increase in nationalism and hostility towards the status quo, I suspect the Macron is not going to give them greater autonomy, just because that would be an encouragement for other regions of France and regions in other European countries to also push for greater autonomy <…>

Sputnik: If we were to learn lessons from the Catalonian crisis what needs to be done in Corsica right now?

Dr Russell Foster: What needs to be done is first of all a major program of reinvestment in Corsica. Corsica is traditionally being overlooked and ignored. This is why it is pushing for autonomy, maybe even pushing for independence.

So, we need to see the Paris government placing more investment and more economic restructuring in Corsica. It’s unlikely that that’s going to happen. Politically, we need to see central governments whether they are in Paris or Madrid, or London listening to their provinces.

European and western countries are bigger than capital cities but increasingly in the last 10 or 20 years governments have been ignoring what is outside of London, New York or Madrid. So we need to see them taking these demands seriously.

What we also need to see is the European Union making clear statements. The EU is very, very good at making moralistic comments on other countries beyond the EU but when it’s an issue within the EU, as we saw in Catalonia, it is silent.

The views expressed in this article by Dr Russell Foster are solely those of the speaker and do not necessarily reflect Sputnik's position.
Newsfeed
0
Access to the chat has been blocked for violating the rules . You will be able to participate again through:∞. If you do not agree with the blocking, please use the feedback form
The discussion is closed. You can participate in the discussion within 24 hours after the publication of the article.
To participate in the discussion
log in or register
loader
Chats
Заголовок открываемого материала