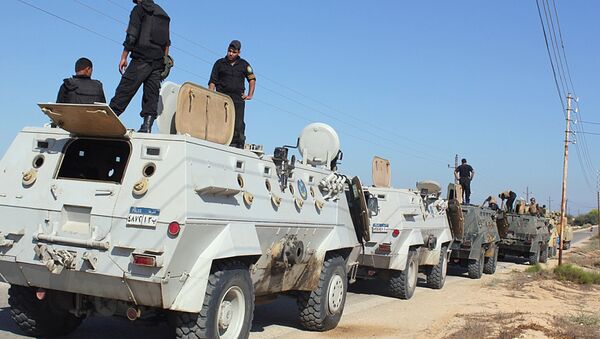 Egypt has been fighting jihadist insurgency in northern Sinai since the ouster of then-President Mohamed Morsi in 2013. A year later, Sinai's indigenous militants pledged their allegiance to Daesh terrorist group.

The Egyptian Air Force has carried out strikes on militant’s hideouts in the northern and central parts of the Sinai Peninsula, the army spokesperson said Friday.

“The Egyptian Air Force has carried out strikes on shelters and munition storage, which are used by terrorists to mount attacks on law enforcement bodies and civil facilities in the northern and central Sinai Peninsula,” the spokesperson’s statement reads, adding that Egypt's navy, border security forces, and police had stepped up measures to protect Egypt’s land and maritime borders in order to prevent the flow of terrorists to the country’s territory.

The Egyptian Army announced earlier in the day the launch of a major operation against Islamist militants across the country, an army spokesman said in a televised statement.

The spokesman added that the operation also includes other parts of Egypt such as the Delta and the western desert.

The main threat to the security of Egypt comes from the north of the Sinai Peninsula.

Egypt has been fighting the jihadist insurgency in northern Sinai since the army overthrew then-President Mohamed Morsi in 2013. Police and security forces have frequently been the target of deadly attacks staged by Islamists in the area.

In 2014, Sinai's indigenous militants pledged their allegiance to Daesh terrorist group. Since then, the Wilayat Sinai, the Daesh branch in Egypt, has claimed responsibility for a number of deadly attacks in the area.