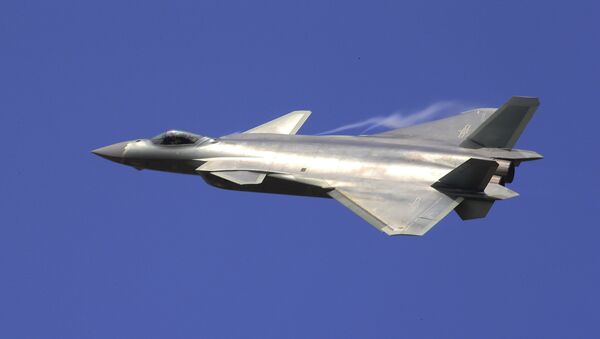 China’s J-20 stealth fighter jet, one of the few fifth-generation jets in the world, has been deployed to the South China Sea and is armed with live weapons to patrol the disputed waters.

"We just received a group of jets from Russia and inaugurated the J-20 last year, and now we can put them into a real combat mission in the South China Sea," says Xu Guangyu, senior adviser to the the China Arms Control and Disarmament Association, as quoted by the Global Times Friday.

"The appearance of advanced People's Liberation Army fighter jets capable of attacking surface combat vessels in this region is sort of a reaction to the provocation by the US," Xu continued.

​In January 2018, a US Navy destroyer sailed a bit too close for comfort to an island in the South China Sea disputed by China and the Philippines.

Analysts say the J-20 may have a limited impact on the situation in the South China Sea, the Asia Times notes, as the aircraft are not designed for maritime patrols but air superiority over land held by an enemy. In addition to "production bottlenecks" limiting the total production of J-20s, "the high temperatures, humidity and brine corrosion there will render the J-20's stealth coating ineffective after prolonged exposure to such an environment," the publication notes.

The J-20s and Su-35s can be stationed on China's collection of "unsinkable aircraft carriers" thanks to Beijing's prolific island-construction and land reclamation efforts in the South China Sea, which has included the construction of airstrips and hangar facilities.

​"The J-20 will also change the history of the air force in the Asia-Pacific region. In the past, only the US and its allies like Japan were capable of arming stealth fighter jets," military analyst Song Zongping explains. "But now, their monopoly in this region has been broken by China's J-20."