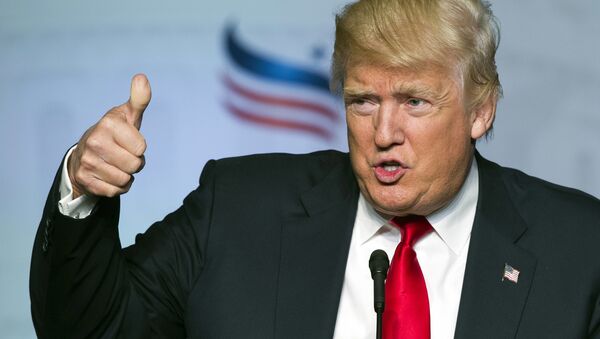 © AP Photo / Cliff Owen
Subscribe
International
India
Africa
On Tuesday, it was revealed that the Pentagon, at the request of US President Donald Trump, is looking at dates for a potential military parade that could take place in Washington, DC, sometime in November.

According to reports, the parade, if all signs are go on the matter, would likely happen over Veterans Day weekend.

Why the sudden interest in having uniformed servicemembers walk down Pennsylvania Avenue alongside tanks, you ask? Turns out Trump was inspired by the parade he witnessed in France for Bastille Day in 2017.

​For Kathy Kelly, co-coordinator of Voices for Creative Non-Violence, funding for the parade, which has been estimated to be between $20 and $25 million, could be put to better use.

"The militarization process keeps us in a permanent warfare state and keeps pouring our resources into the pockets of the military contractors who will only be happy to put themselves on display for a big ostentatious parade," the activist added.

And if the military parade ends up being scheduled on Veterans Day weekend, Kelly says it'll be a shame.

"What a scandal to do that on the day that we ought to be celebrating Armistice Day… understanding that the WWI tragedy was a squandering of lives, a bloodletting, that accomplished nothing that was good for humanity," she said.

Veterans Day, November 11, is celebrated in Europe as Armistice Day, the day the ceasefire that ended World War I was implemented, and has a decidedly more somber tone than the American festivities.

Chiming in, Peter Kuznick, a professor of history and director of the Nuclear Studies Institute at American University, noted that despite the US' history in warfare being defined by failure since WWII, it hasn't exactly kept Americans from continuously glorifying the military.

"The message that we should have received is that military solutions rarely ever work… it's something that should be the last resort," Kuznick told Kiriakou. "There's almost this inverse relationship that the poorer we do on the battlefield, the more we glorify the military."

But even if the military parade doesn't happen, Kuznick says that Americans can just "turn on the Super Bowl or any football game" to get a whiff of some military glorification.

"The faith in the military is the one thing that people seem to be able to agree on… you don't have to go to a military parade," he said.

While many have criticized Trump's parade ambitions, it's safe to say that the Council of DC isn't on board with the idea after their clever social media team tweeted out "tanks but no tanks."