A pro-EU group looking to reverse the results of the Brexit referendum has been given more than 400,000 pounds' worth of funding by US billionaire George Soros, according to media reports. Sputnik spoke to UKIP MEP Bill Etheridge about this development, and about why Soros may be trying to influence the British vote to leave the European Union.

Sputnik: What right does George Soros have to try and influence the UK democratic vote?

Bill Etheridge: He has no right, seeking to intervene in the democratic process, to support an elitist movement which is trying to defy the will of the British people and it’s despicable.

World
Soros Pumped Hundreds of Thousands of Dollars In Anti-Brexit Campaign – Reports
Sputnik: Is this just another example of foreign influence trying to influence the UK to remain in the EU?

Bill Etheridge: It’s an example of foreign influence but also the influence of the mega rich and the elite corporatists who wish to suppress the people in order to have global governance, and he is a shining example of what we are talking about here.

Sputnik: Why do you think Mr. Soros trying to influence any decision now, and not before the referendum a few years ago?

Bill Etheridge: I don’t think that anybody like him, anyone of the establishment and anyone in power actually believed that the people would rise up the way they did. Now they’ve realised that they have a problem and they are throwing as much as they can on their side to try and reverse the will of the people. 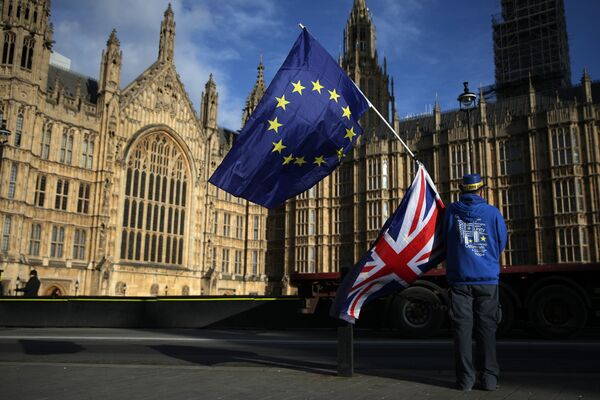 A pro-European Union,(EU), anti-Brexit demonstrator holds the EU and UK flags outside the Houses of Parliament, in central London on January 22, 2018
© AFP 2022 / Daniel LEAL-OLIVAS

Sputnik:  Best for Britain are reportedly going to use this money on campaigns to change people’s minds. Is this going too far now?

Bill Etheridge: Well there should be no deal anyway; there should be a simple withdrawal. In regards to what they are doing, if they wish to waste their money and to change the mind of the British people, [they can] go ahead. They will be met with stiff resistance because for every person they seek to buy out we will speak to 100 more who will appreciate freedom and not be taken in by this nonsense.

Bare Seats After Brexit​: Belgium MEP Backs Transnat' Lists in Epic Rant (VIDEO)
Sputnik: Best for Britain say this coverage of the money by UK media outlets is a scare tactic, what are your thoughts on this?

Bill Etheridge: It’s a reality, it’s not a scare tactic, and it’s a fact. This is what they are doing; they need to be exposed for what they are. Those of us on the side of freedom will work tirelessly to make sure they are exposed and people see through their lies. It’s an example of the international elite seeking to confound the will of the people and I have faith in the British people, who have the strength of character to resist this nonsense and stand strong by their decision to be free and independent.

The views and opinions expressed by Mr. Bill Etheridge are those of the speaker, and do not necessarily reflect those of Sputnik.