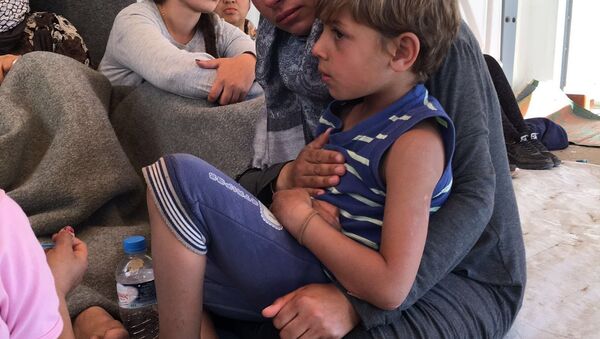 It's estimated more than 7,600 asylum seekers are stuck on the island of Lesvos, the majority of them in Moria where conditions in the camp are described as "harsh", "squalid" and "dangerous" by human rights organizations working there.

Meanwhile a vaccination campaign for children stuck on the Greek island of Lesvos is underway. Charity, Doctors Without Borders (MSF) aims to vaccinate 2,000 children who are living in the Moria camp. The program hopes to guard against deadly childhood illnesses, including measles.

From today, this little cutie and many other refugee children in #Lesvos will be protected against measles thanks to the combined efforts of @MSF teams and health authorities. We hope that #Europe will treat them with the same humanity and care. pic.twitter.com/sa5WMk45V4

​"We can vaccinate kids against deadly childhood illness but we can't sadly vaccinate them against the difficulties they face living in harsh conditions in a place like Moria" MSF Sea tweeted.

​The refugee camps are operating at double their capacity and the numbers are growing. It's thought around 350 unaccompanied minors are among the 7,000 people living in the Moria camp built for 2,300 people.

We can vaccinate kids against deadly childhood illness but we can't sadly vaccinate them against the diffuculties they face living in harsh conditions in a place like #Moria. pic.twitter.com/59eWW5Emeg

In March 2016, the European Union (EU) signed a refugee deal with Turkey. So-called irregular migrants would be sent back from Greece to Turkey; in return, specially selected Syrian refugees from Turkish refugee camps would be resettled in Europe under the ‘one-for-one' policy.

Ahead of the EU-Turkey deal, members of the European Parliament Foreign Affairs Committee warned: "Outsourcing the refugee crisis to Turkey is not a credible long-term solution to the problem."

In September 2017, some 4,800 people arrived on Greece's shores — the highest number in a single month since March 2016, according to the UN's refugee agency (UNHCR).

UNHCR spokesperson Cecil Pouilly told a news conference in Geneva that the situation in refugee camps including Moria, Vathy and Chios are critical.

Some 10,000 asylum seekers are still stuck in government run facilities on the Greek islands unable to leave due to the restrictions imposed on them by the EU-Turkey deal, two thirds of them are women and children.

In December 2017, MSF called upon EU and Greek authorities to open up the islands and allow people to move to the mainland saying families trapped on the island are "on the brink of a humanitarian crisis." Five people died as a result of the living conditions in the camp.

The cameras have left #Lesvos, but bitterness remains https://t.co/dxGcuMSeYG Islanders' view on some volunteers and NGO's. #refugeecrisis

​A mobile clinic to treat children and pregnant women was opened at the end of 2017 while MSF continues to negotiate with Greek authorities to improve sanitation conditions in the camp.

More than a million migrants arrived in Europe in 2015; the peak of the refugee crisis. The majority of refugees and asylum seekers journeyed by sea via Turkey, some ventured over land. Conflicts in Syria, Afghanistan and Iraq remain the biggest push factors for the sheer number of people fleeing their home.

In Greece, authorities separated refugees. Those from Iraq, Afghanistan or Syria were allowed to pass; everyone else considered an 'economic migrant' and held back. This led to violent protests on the Greek border with Macedonia after hundreds of people from Iran, Bangladesh and Morocco were prevented from crossing into Greece.

READ MORE: Europe One Year On: A Million Migrants, a Million Lives, Still no Solution