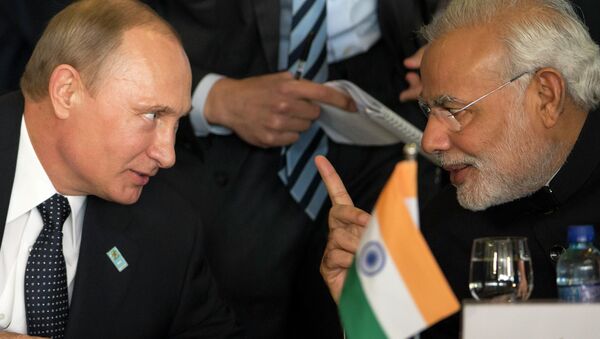 © AP Photo / Felipe Dana
Subscribe
International
India
Africa
India’s ties with Central Asia are marginal, if compared to Russia and China. Yet India’s growing interest in the region is evident, as the Modi government is making visible efforts to bridge the disconnect.

New Delhi (Sputnik) — Russian Ambassador to India Nikolay Kudashev has said that Russia has no issues with the expansion of partnerships linking India with the countries of Central Asia.

"We welcome India's presence in the different parts of the world. India is welcome in the region (Central Asia). The best way is dialogue and association with the common development program. Please come and we can do it together… there is no issue," Russian ambassador to India Nikolay Kudashev said on Wednesday.

Ambassador Kudashev was speaking at an event organized to mark "70 years of Russia-India diplomatic ties" at Jawaharlal Nehru University in New Delhi.

"India is our friend and strategic partner. There are numerous ways; first is the SCO (Shanghai Cooperation Organization), and there are many others. There are various approaches, be it connectivity, be it transportation or be it energy. So, India is welcome," he added.

Putin-Modi Meeting: 'Two Leaders Took Indo-Russian Relations to a New Level'
The ambassador also extolled the role of the current leadership in India and Russia in strengthening the historic ties between the two countries.

"The tie between India and Russia has matured in the seventy years but it seems to be very young. Thanks to the commitment of the people of Russia and India. Thanks to the leadership of Russia and India; first and foremost, Prime Minister Narendra Modi and President Putin. Lots of activities were done last year but what also matters is the real substance of our ties. Now we are having political dialogue at the highest level, including our commitment to the principles of international law in the global arena. Our position with regard to unilateral sanctions is the same," Russian ambassador to India Nikolay Kudashev told Sputnik.

India does not share physical borders with any of the Central Asian states which is a huge hurdle in promoting and expanding economic and commercial links with them. However, India has made significant progress in fostering cooperation by concluding the trilateral agreement for the renovation of Chabahar port, development of the International North-South Transport Corridor (INSTC) and becoming a member of the Ashgabat Agreement. India's membership in the Shanghai Cooperation Organization (SCO) and partnership with the Eurasian Economic Union (EEU) are also aimed at bridging the gap.