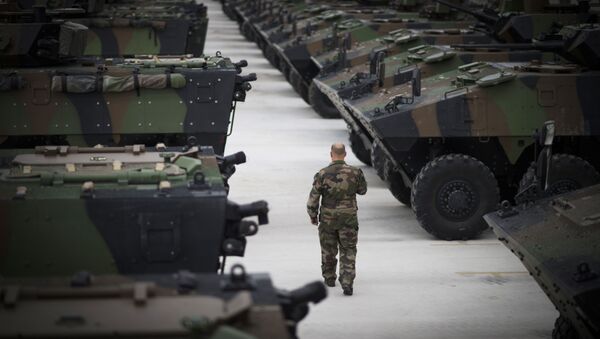 MOSCOW (Sputnik) - The draft French defense budget proposes an annual increase of 1.7 billion euros between 2019 and 2022 and the yearly boost is set to reach 3 billion euros from 2023, the French Defense Ministry said Thursday.

A total funding of 295 billion euros is previewed for 2019-2025, according to the ministry's Twitter.

The ministry, which unveiled the new budget proposal earlier in the day, a special effort will be put into cyberdefense with 1.6 billion euros earmarked for this area and additional 1,000 positions as well as a permanent cyberunit.

The intelligence services have been promised 1,500 new positions and 4.6 billion euros for equipment.

Le Pen Vows to Boost France's Defense Spending to 3% of GDP by 2022
The increase of the defense spending comes amid US demands for European countries to contribute more to the NATO budget for their own defense. During his election campaign, France's President Emmanuel Macron vowed to raise defense budget to 2 percent of GDP by 2025 in line with the NATO demands. The military upgrade is also believed to be a part of the French president's efforts to improve collective European defense capacity and strengthen the EU as UK's withdrawal from the bloc looms.

Currently, the French armed forces are participating in several military campaigns: in Syria and Iraq French troops are engaged in the anti-Daesh operation, whereas about 4,000 troops are fighting terrorists in West and Central Africa. Within the French territory, there is a 7,000-strong contingent, which has been patrolling the streets since 2015 in the wake of a series of deadly terrorist acts.