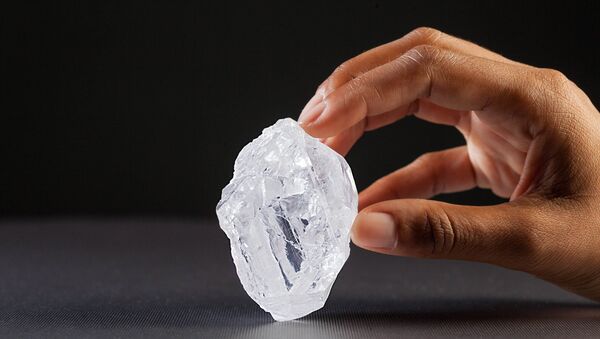 © Photo : Donald Bowers/Getty Images for Sotheby's
Subscribe
The cryptocurrency Israel’s Diamond Exchange expects to launch is largely hoped to boost trade and make operations more transparent, as this time its sales will directly depend on diamond price fluctuations.

"The new cryptocurrency will be backed by the diamond turnover on the Israeli market and reflected as an updatable indicator in the salesroom and different retail websites, along with other national and international economic indicators," Israel’s Diamond Exchange, which is among the top three largest in the world, said in a statement.

Blockchain-based Carat and another digital currency, which goes by the name Cut, are expected to arrive around May and be widely used by investors as well as the general public.

Most significantly, as much as 25 per cent of the value of Carat will be backed by diamonds listed on the exchange and commonly perceived as among the most reliable assets, in an attempt to attract larger investments. That should add to its general attractiveness as compared to other global cryptocurrencies, said Eli Avidar, the exchange’s managing director.

The three main diamond exchanges worldwide are located in Mumbai, the Dutch city of Antwerp and Ramat Gan, a city east of Tel Aviv.

000000
Popular comments
Who would have thought? Khazar- coin perhaps? Or Holohoax-coin?

Mikhas
8 February 2018, 14:33 GMT1
000000
If i read this correctly, they are selling 7 billion USD worth of diamonds per year, and now they will create out of thin air additional 28 billion USD based on that diamonds (which will be already sold for more traditional currencies). Aren't they greedy to much? However, there is not lack of fools in this world willing to jump on this scheme as they jumped on Bitcoin or whatever else, so there will be certainly some good income for Israel's Diamond exchange.
oldman
8 February 2018, 14:59 GMT
000000
Newsfeed
0
New firstOld first
loader
LIVE
Заголовок открываемого материала
Access to the chat has been blocked for violating the rules . You will be able to participate again through:∞. If you do not agree with the blocking, please use the feedback form
The discussion is closed. You can participate in the discussion within 24 hours after the publication of the article.
To participate in the discussion
log in or register
loader
Chats
Заголовок открываемого материала
Worldwide
InternationalEnglishEnglishMundoEspañolSpanish
Europe
DeutschlandDeutschGermanFranceFrançaisFrenchΕλλάδαΕλληνικάGreekItaliaItalianoItalianČeská republikaČeštinaCzechPolskaPolskiPolishСрбиjаСрпскиSerbianLatvijaLatviešuLatvianLietuvaLietuviųLithuanianMoldovaMoldoveneascăMoldavianБеларусьБеларускiBelarusian
Transcaucasia
ԱրմենիաՀայերենArmenianАҧсныАҧсышәалаAbkhazХуссар ИрыстонИронауОssetianსაქართველოქართულიGeorgianAzərbaycanАzərbaycancaAzerbaijani
Middle East
Sputnik عربيArabicArabicTürkiyeTürkçeTurkishSputnik ایرانPersianPersianSputnik افغانستانDariDari
Central Asia
ҚазақстанҚазақ тіліKazakhКыргызстанКыргызчаKyrgyzOʻzbekistonЎзбекчаUzbekТоҷикистонТоҷикӣTajik
East & Southeast Asia
Việt NamTiếng ViệtVietnamese日本日本語Japanese中国中文Chinese
South America
BrasilPortuguêsPortuguese
NewsfeedBreaking
12:30 GMTPutin and Modi Hold Negotiations at 21st India-Russia Summit
12:27 GMTRDIF: Russia Ready to Provide India With One-Shot Sputnik Vaccine for Adolescents
12:26 GMTKamala Harris' Staffers Reportedly Describe Her as 'Soul-Destroying', 'Bully'
12:26 GMTIndian Music Group T-Series Becomes World's First YouTube Channel to Exceed 200 Million Subscribers
11:56 GMTNagaland Police Accuse Indian Army of Killing Villagers as Death Toll in Firing Incident Rises to 14
11:34 GMTEuphoric Cricketers Celebrate as Team India Register Historic Win Over Kiwis in Mumbai Test Match
11:14 GMTUK Trade Secretary Visiting US 'to Deepen Relations' Amid Bilateral Tariff Row
10:58 GMTLIVE UPDATES: Vladimir Putin Leads Delegation to New Delhi for 21st Annual India-Russia Summit
09:51 GMTKremlin Calls US-Russia Ties 'Lamentable' on Eve of Putin-Biden Video Call
09:37 GMTPeskov to Sputnik: Russia, India Should Boost Cooperation Amid New 'Sore Spots' in Asia-Pacific
09:33 GMTThirteen Pilgrims Injured in Drunk Driving Accident in Mexico City
09:07 GMTWoman Accusing Chris Cuomo of Sexual Misconduct Used to Work With Ex-CNN Host at ABC, Media Says
09:05 GMTVenezuelan 'Opposition Government' FM Resigns, Slamming It for Corruption and Incompetence
08:50 GMTTaiwan to Accelerate Construction of Home Grown Submarine Prototype, Reports Say
08:31 GMTRussia, India Sign Military Cooperation Agreement for Next Decade
08:17 GMTArgentina Greenlights Sputnik Light Both as COVID-19 Vaccine and Booster Shot
08:13 GMTDoctors in India Hold Nationwide Protest Against Delay in Medical Exam Counselling
08:12 GMTOne Year After Israel-Morocco Normalisation Pact, Trade and Business Still Sluggish
07:49 GMT'Sleepy Joe Stole Christmas': Trump's Save America PAC Pans Biden for Nightmare Supply Chain Crisis
07:14 GMTIndia and Russia Sign Number of Military Agreements and Contracts