Sobchak Wants to Convey to Trump Importance of US, Russia Engaging in Dialogue 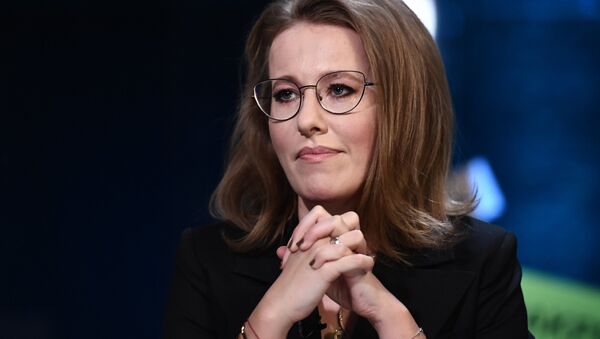 © Sputnik / Evgenya Novozhenina
/
Go to the mediabank
Subscribe
International
India
Africa
WASHINGTON (Sputnik) - Russian presidential candidate Ksenia Sobchak is currently in Washington, where she has a number of meetings scheduled with US authorities and is expected to participate in the US Annual National Prayer Breakfast on Thursday. US President Donald Trump is set to deliver an address at the event.

Sobchak told Sputnik that if she has a meeting with Trump later on Thursday she will tell him it is within the interests of both Washington and Moscow to engage in a dialogue.

"I was officially invited to this event. If the meeting happens — I have something to say, especially because I met Trump many years ago in Russia. I took a big interview with him. If this meeting takes place, I will certainly talk about the interests of my country, and that it is in the interests of both Russia and the United States to embark on the path of negotiations and improving ties," Sobchak said.

US media has a clear bias against Russia, which is portrayed as the country’s key enemy, she noted.

"Certainly, I see strong bias in the [US] news. Russia has once again become enemy number one," Sobchak said.

She added that Russia's alleged meddling in the 2016 US presidential election was a topic that dominated the news in the United States, and that this approach only worsened the relations between the two countries.

During his 2016 presidential campaign, Trump told supporters that he wanted to improve bilateral relations and work with Russia to defeat the Daesh terrorist group. However, the United States under the Trump administration has boosted sanctions against Moscow for allegedly meddling in its election and interfering in Ukrainian affairs. Moscow has repeatedly denied allegations of interfering in the US election, insisting that it does not meddle in the internal affairs of other countries. Presidential spokesman Dmitry Peskov has called the allegations of interference groundless, while Foreign Minister Sergei Lavrov has stressed that the claims had been unsubstantiated.

"I do not believe that all rich people in Russia should be punished for living in Russia, where Putin rules" Sobchak said.

The presidential hopeful said that the “Kremlin report” damaged bilateral relations and could have negative effect on the people included in it.

Sobchak went on to say that Washington was creating a situation that could provoke Russians to retaliate.

"Patriotic feelings in Russia will increase proportionately to sanctions. And the country will want to seek revenge, to resist such aggression. It will not lead to anything good, as we can remember from history," Sobchak said.

On January 30, the US Treasury Department issued the "Kremlin report," listing more than 200 Russian officials and businesspeople. The document does not imply the automatic imposition of sanctions against the individuals listed, but designates them as those who might face restrictions in the future. The "Kremlin report" was prepared in accordance with the US Countering America's Adversaries Through Sanctions Act, which was enacted by US President Donald Trump on August 2. Russian President Vladimir Putin characterized the report as an "unfriendly move" by the United States that harmed relations between Moscow and Washington.

Sobchak said that she had so far not noticed any improvement in the frayed relations between Moscow and Washington, and added that her goal was to seek a positive change in relations on a non-governmental level.

The presidential candidate argued that relations between the two countries were now more complicated than they were at any point in history, including the Cold War.

“I would like to point to the fact that during the Cold War there were no sanctions, there was the Jackson-Vanik amendment, but basically that's pretty much it. If we judge simply by facts, today the sanctions imposed on Russia are much more serious. That means that our relations are worse than during the Cold War. Surely, we need possible informal contacts between our countries. I want to do just that,” she said.

Asked about the sanctions currently imposed on Russia, Sobchak said that reversing them would require lengthy negotiations.

“I think that this concerns the negotiations on Syria, Donbass and Ukraine. Then, it's a question of a possible compromise, which would be realistic. You see, you cannot blame everything on America, or only [Russian President Vladimir] Putin. Both countries must find an acceptable compromise,” the candidate pointed out.

Sobchak gave a speech at the US Center for Strategic and International Studies and also had several meetings with people who have an interest in Russia. 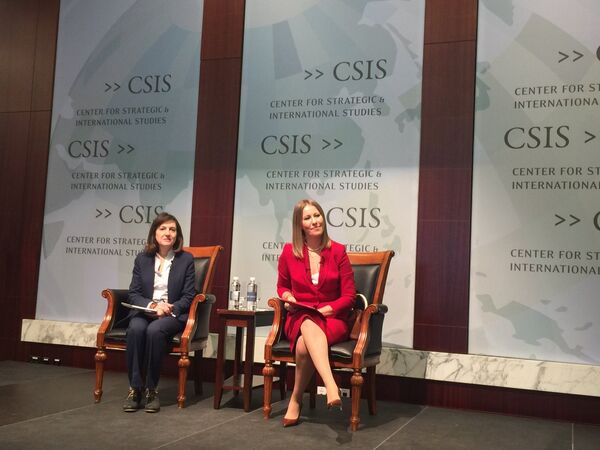 “Unfortunately, I cannot talk about this, because the meetings are of a private nature,” the journalist-turned-candidate said.

Sobchak stressed that the ultimate goal of her visit was to establish connections with people who could help resolve the differences between the United States and Russia.

"If you remember, during the Cold War, through the establishment of such ties, all important contacts between Russia and America occurred,” she said.

The Russian presidential candidate emphasized the negative effect that the exclusion of Russia from international processes had on the West.

"The tactic of the West to completely remove Russia from all international processes is first and foremost detrimental to the West," Sobchak said.

She went on to explain that a system had been built to isolate Russia, making the country feel as though alliances have been formed against it. Sobchak warned that such isolationist policies could lead to the growth of nationalism and dictatorship, and that the best guarantee for peace and stability would be a policy of inclusion.

As an example, the presidential hopeful cited Germany, which was incorporate in global institutions to the fullest extent after World War II instead of being isolated and suppressed. Sobchak added that Russia sincerely sought to be part of European institutions and expressed hope the West would embrace this idea.

Russia and Kiev need to find a compromise to settle the Crimea issue, Sobchak said, adding that the West's calls to simply have the peninsula returned to Ukraine stem from populism.

"There's nothing easier than throwing around catchy slogans like 'Once I am president, I will return Crimea to Ukraine. Everyone understands it is populism, it's impossible. It's a complicated process that requires some sort of a compromise solution," she noted.

Sobchak pointed out that while she understood the West would prefer it if Russia simply gave Crimea back to Ukraine, it would be unfair to the 2 million Russians living in Crimea "who have become hostage to the current situation."

READ MORE: I Spy With My Little Eye: US Recon Plane Reportedly Spotted Snooping Near Crimea

Among possible solutions, Sobchak suggested that a peace agreement be reached with Kiev so that Ukraine could get some monetary compensation or guarantees. Another option would be to conduct a new referendum, she said.

The Russian presidential hopeful added she had not yet discussed this matter with any international partners, as doing so without having a general road map for the normalization of ties with Ukraine in place would be premature.

Russia
S-400 Deployment in Crimea Aiming to Ensure Russia's Security - Kremlin
Crimea seceded from Ukraine and reunified with Russia after 96 percent of its residents supported the move in a referendum in March 2014. The vote was held after new authorities took power in Kiev during what many considered to be a coup.

Ukraine and the majority of Western states have not recognized Crimea's reunification with Russia and consider the peninsula to be occupied territory. In response to the events, the United States and the European Union have introduced several rounds of sanctions against Moscow. In 2015, the Ukrainian government issued a decree prohibiting all non-Ukrainians without a special permit issued by Kiev from entering the peninsula.

The Russian officials have repeatedly pointed out that the reunification took place via a referendum, a democratic procedure. Russian President Vladimir Putin has said that the matter of the peninsula's belonging was closed once and for all.

Russian Opposition Does Not Need US Support

The opposition in Russia does not need any support from the United States, Ksenia Sobchak stressed when asked whether she believed that Russian opposition forces needed Washington’s backing.

"I think it's generally wrong when a foreign state interferes in the internal politics of another state. I think that Russia will figure it out, and the United States will figure it out. I am against any interference," Sobchak said.

Presidential hopeful Sobchak has defined herself as a candidate "against all" and urged Russians, who do not support any candidates, to vote for her instead of boycotting the election.

The presidential campaign in Russia began in December and the election is scheduled for March 18.