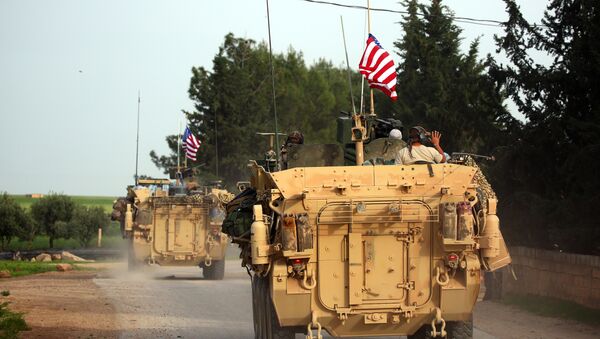 "Tillerson's visit will take place at the request of the United States. McMaster is coming to Turkey at my invitation. These are important negotiations because we are trying to set up relations so that there is no mistrust in them that exists now. We will discuss Syria, Iraq, the fight against terrorism, bilateral relations," Ibrahim Kalin told reporters.

Among the factors souring bilateral relations, Kalin mentioned the United States’ support for Islamic cleric Fethullah Gulen's movement — referred to as Fethullah Terrorist Organization (FETO) and accused by Ankara of masterminding the 2016 failed coup attempt — and militants in Syria, as well as the trials of Turkish bankers and entrepreneurs in the United States.

Turkish Deputy PM Urges US to Help Avoid Face-Off Between Troops in Syria
He expressed hope that all these problems would be quickly resolved so that the relations can develop positively.

On Tuesday, local media reported that McMaster would come to Istanbul over the weekend, while Tillerson was set to visit Ankara the following week.

Turkish-US Relations Won't Recover Until US Drops 'Greater Kurdistan Project'
Recently, the row between Ankara and Washington got continuation after the US announced plans to build a 30,000-strong security force on Syria's border with Turkey. The force was expected to consist of Kurdish-led Syrian Democratic Forces (SDF) dominated by the People's Protection Units (YPG) militia, which Turkey considers to be a terrorist group affiliated with its own illegal Kurdish organization, the Kurdistan Workers' Party (PKK). The latter group, which calls for Turkish Kurds' autonomy from Ankara, is listed as a terrorist organization by both Ankara and Washington. However, the US draws a distinction between the PKK and Syrian Kurds. The Kurdish issue remains the apple of discord between the US and Turkey, as the US supports the YPG units, which are fighting the Daesh terror group in Syria, whereas, Ankara has repeatedly expressed hope that Washington will stop supplying Syria's Kurds with weapons.

The US plans on Syrian northern borders immediately prompted an angry reaction from Ankara, with Turkish President Recep Tayyip Erdogan accusing Washington of forming a "terrorist army" and vowing to strangle it "before it is born." On January 20, Ankara took actions and began its operation against Kurdish military formations in Syria's Afrin, code-named "Operation Olive Branch," which, according to US Defense Secretary James Mattis, was hampering what he said was the fight against terrorism.