'I Will Fight for EU Renewal as Foreign Minister' - Germany's Schulz 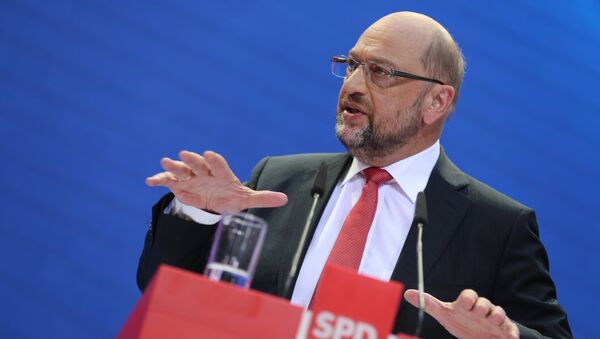 Martin Schulz announced Wednesday that he would step down as leader of Germany's Social Democratic Party and intended to become foreign minister in the next coalition government led by Chancellor Angela Merkel.

"I will fight for the renewal of the European Union," the acting SPD leader Martin Schulz, who also was the President of the European Parliament in 2014 — 2017 said about his plan for the future post of Germany's foreign minister.

Andrea Nahles who is going to replace Schulz as the SPD head welcomed that as the foreign minister in the new German government he intends to focus on Europe.

Schulz also noted that Germany's policy concerning the European Union is usually reduced to trade and financial issues, whereas he is going to widen the agenda.

Germany Takes the Lead in Breaking EU Rules
The leader of the SPD stressed he was optimistic that he persuaded his party's membership to support the coalition deal he agreed with Chancellor Angela Merkel's Christian Democrats on Wednesday morning.

German Chancellor Angela Merkel's CDU / CSU alliance and the SPD completed the coalition negotiations on forming the government, which started in December 2017 after the talks on the formation of the coalition government that would include Merkel's CDU/CSU, the Green Party and the FDP collapsed.

Merkel's CDU/CSU alliance won the parliamentary election on September 24, 2017, obtaining 33 percent of votes, however, it failed to secure an absolute majority and thus had to form a coalition in order to build a government. SPD leader Schulz previously expressed his unwillingness to form the Grand Coalition with Chancellor Angela Merkel's ruling conservative alliance, however, after the Free Democrats pulled out from the negotiations in November after four weeks of fruitless efforts to find a consensus between the parties, the SPD agreed to enter into negotiations.