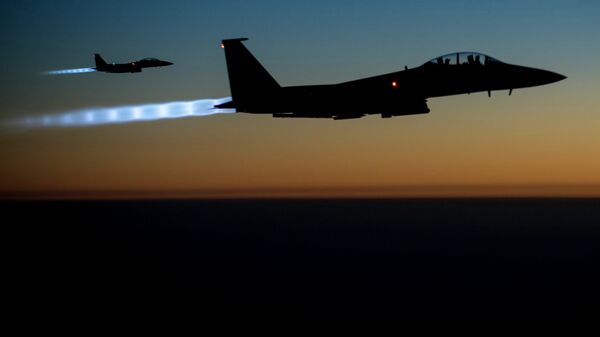 Centcom announced that US-led coalition forces in Syria had opened fire at pro-Syrian government forces "in defense" of Syrian Democratic Forces headquarters. Damascus has yet to comment on the attack.

Syrian state-run TV has slammed the US-led coalition attack on government's allied troops east of the Euphrates River as a "new aggression" and "an attempt to support terrorism".

"International coalition forces are bombing popular forces fighting "Daesh" and the [Syrian Democratic Forces] east of the Euphrates river and there are reports of casualties," statements carried by the stations said.

According to ABC citing sources, at least 100 pro-government forces have been killed in air and artillery strikes carried out by the US-led coalition in Syria. There were no US casualties in the attack on the headquarters, the media outlet claimed.

Earlier in the day, US Central Command announced that the coalition conducted defensive airstrikes against pro-government forces in Syria that attacked Syrian Democratic Forces headquarters near the Euphrates River.

"Syrian pro-regime forces initiated an unprovoked attack against well-established Syrian Democratic Forces headquarters Feb. 7," the release said. "In defense of Coalition and partner forces, the Coalition conducted strikes against attacking forces to repel the act of aggression against partners engaged in the Global Coalition's defeat-Daesh mission."

UPDATE: The Syrian Foreign Ministry has blasted the US-led alliance for the attack, urging the United Nations to bring the military bloc to account, according to the SANA news agency.

US-Led Coalition Shifts Operations in Iraq to ‘Sustaining Gains’ Against Daesh
The Pentagon has been providing the Kurdish-dominated Syrian Democratic Forces with weapons, saying recently, however, that the weapons were provided for use in Syria's Raqqa to retake it from Daesh.

Earlier, the Defense Post news website reported that the US-led coalition was training a force on Syrian territory controlled by the SDF to maintain border security, which has drawn sharp criticism from Ankara.

This has been not the first attack on pro-Damascus forces carried out by the US-led coalition. On April 6, 2017, the US launched 59 Tomahawk cruise missiles at the governmental military airfield in Ash Sha’irat after the National Coalition for Syrian Revolutionary and Opposition Forces blamed Damascus for an alleged chemical weapon attack in Khan Shaykhun in Idlib. The strikes had been carried out even prior to the launch of a probe into the reported chemical attack and had been harshly condemned by Moscow that called for a proper inquiry into the incident.

The US-led coalition of more than 70 members was created to fight against Daesh terror group. The airstrikes conducted by the coalition in Syria are not authorized by the government of Syrian President Bashar Assad or the United Nations Security Council.