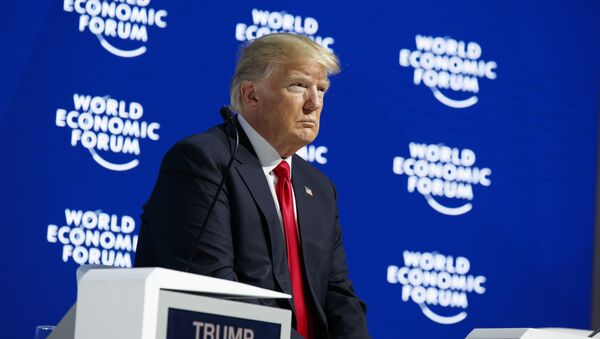 © AP Photo / Evan Vucci
Subscribe
International
India
Africa
US President Donald Trump has repeatedly claimed that the military will grow under his watch, financed by increasing an already large defense budget. However, a number of factors are poised to make the effort to fund this expansion more difficult than Trump may have realized, according to a new Congressional Budget Office report.

The Congressional Budget Office previously showed that if Trump's full-year military budget were passed, the national debt would grow an extra $683 billion over the next 10 years.

On top of rising healthcare costs, more expenditures for Social Security and higher interest payments on old debt, the CBO now reports there are even more financial worries that could risk ambitious military plans for a 350-ship navy, the purchase of more fighter jets and increased manpower.

Specifically, within the DoD budget, "costs of developing and buying weapons have been, on average, 20 to 30 percent higher than the Defense Department's initial estimates," compensation costs for service members — active and retired — have been "rapidly increasing" since 2000 and "costs of operation and maintenance per active-duty service member have been steadily increasing since at least 1980," the CBO notes.

These issues "have their own momentum" that will "create mismatches" between the forecast five-year budget and the actual price tag that will have to be paid, the CBO reported.

Trump requested a huge surge in the Pentagon's budget last year and eventually signed the National Defense Authorization Act in December, authorizing more than $700 billion for the Pentagon. But in the US system, just because the president "authorizes" a level of spending doesn't mean it's actually forked over. Instead, the US House of Representatives and Senate must complete the process of appropriating the funds, and Congress has not passed a full-year budget.

The Republican Congress has passed a slew of short-term spending bills since Trump's inauguration in January 2016 and the next one is scheduled to run out February 8. The threat of a new shutdown follows another shutdown just a few weeks ago, from January 20 to January 22, because the prior spending bill had run out without a new one being authorized.

On Tuesday, Trump said in regard to the looming Thursday deadline, "let's have a shutdown," if Congress cannot pass new immigration laws, which were the lynchpin of the budget debate surrounding the previous shutdown. "We'll do a shutdown and it's worth it for our country. I'd love to see a shutdown if we don't get this stuff taken care of."