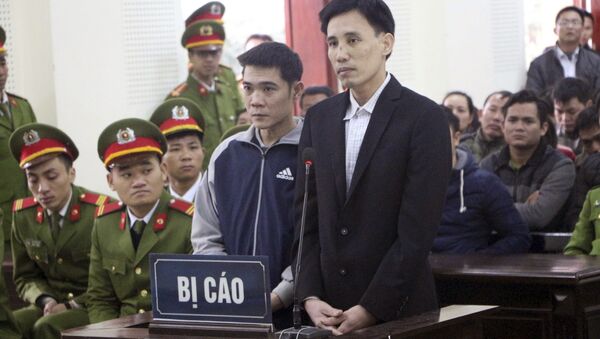 On Tuesday, a Vietnamese court sentenced an environmental activist to 14 years behind bars for allegedly abusing his democratic freedom and disagreeing with officials on duty.

Binh allegedly livestreamed fishermen protesting the plant's spilling of toxins like cyanide and phenol into the ocean. In addition, Binh also reportedly urged the formation of an "independent union" in 2015.

Binh received two seven-year prison sentences for "abusing democratic freedoms to infringe state interests" and for "opposing officials on duty," lawyer Ha Huy Son recently told Reuters. The sentence is one of the toughest the country has ever given an activist. Nguyen Nam Phong, who was involved in the protests, faces a two-year sentence for reportedly opposing two officers.

"Binh said he was innocent, while Phong asked for a reduction of the sentence… The trial was conducted without evidence and objectivity; it was imposed," Son said, who was representing both activists.

In June 2016, the Vietnamese government officially declared that the steel plant was responsible for the environmental disaster. Formosa agreed to pay $500 million in compensation and publicly apologized.

Last year, prominent blogger Nguyen Ngoc Nhu Quynh, who has openly rebuked the Vietnamese government for its human rights violations and corruption, was sentenced to 10 years in prison by a Khánh Hòa Province court after publishing propaganda against the country.

Although Vietnam has undergone economic and social reform, establishing gay, lesbian and transgender rights, the ruling Communist Party continues to censor any denunciation against the government.

"The sentences have been more and more severe, perhaps because of weaker interventions from the outsiders and foreigners, and also because the power holders think this sentence could have deterrence effect," said Son, who has represented many activists.