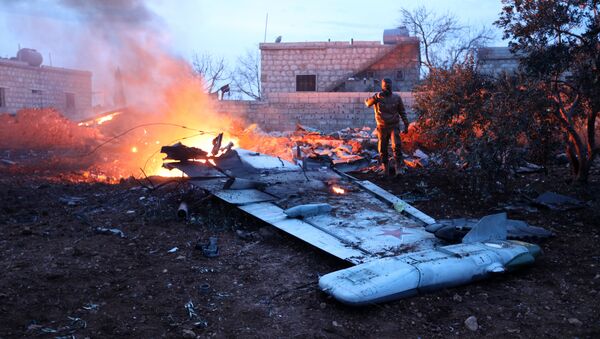 © AFP 2021 / OMAR HAJ KADOUR
Subscribe
The Russian Su-25 jet was downed by a missile launched from an area in Syrian Idlib, controlled by Jabhat Fatah al-Sham. The pilot, who died fighting off the terrorists, was posthumously awarded with the title “Hero of the Russia”. Two Turkish analysts shared with Sputnik their opinion on what this incident means for Syrian peace process.

How did terrorists obtain MANPAD systems?

Head of the Ankara Institute of Strategic Research Rafet Aslantas thinks that militants obtained MANPADs via the US program that supplied the Kurds People's Protection Units (YPG) with, among other things, high-tech portable air-defense systems. Rafet Aslantas believes that since many militants often change which side they are fighting for and take their weapons with them, some of the MANPAD systems could have ended up in hands of Jabhat Fatah al-Sham.

“We have always wondered, if those US supplies were meant to be used against Daesh (banned in Russia), why air-defense systems were also among them, considering the fact Daesh never had attack aircraft in the first place,” Aslantas says.

Oytun Orhan, specialist on the Middle East at the Center for Middle Eastern Strategic Studies (ORSAM), says that in this case all we can do is to play the guessing game, but considers the theory that armaments were supplied by the US to be the most likely explanation, noting that he believes that the group that took down the jet was among those who received weaponry and training as a part of the US program.

The expert also drew a parallel between the Su-25 incident and the recent drone attack on the Russian base at Hmeymin, claiming that the former may very well be the continuation of the latter. Oytun Orhan thinks the latest attack may serve as a message marking US concern over the Turkish operation in Afrin.

What does this attack mean for the Astana peace process?

Rafet Aslantas is adamant that the military contingent of the countries working on establishing a de-escalation zone in Idlib face an acute threat of being discredited, reminding that a Turkish tank was destroyed almost simultaneously with the Russian jet fighter.

He believes that for the Astana peace process to succeed, all countries that support the initiative must work together, because if certain parties decide to violate agreements, while others adhere to them, the situation will only get worse, and the process will be stalled. Rafet Aslantas is confident that Turkey and Russia will fulfill their responsibilities and the positions of other actors on the matter are soon to be revealed.

His counterpart, Oytun Orhan is confident that Turkey sees the attacks, like the one performed against the Russian jet, as an attempt by those who were left “overboard” to sabotage the Astana process and to compromise the de-escalation agreements.

“Attempts to distort Turkish-Russian relations, like the assassination of Andrey Karlov and the attack on Hmeymin gave the quite the opposite effect than intended, as cooperation between the two countries has only intensified,” says Oytun Orhan.

“If both sides decide that the US is behind those attacks,” concludes the expert, “cooperation between two countries will continue to develop and foster speeding up the construction of new observation points.”

Russian Su-25 jet fighter was downed by a MANPAD missile on February 3, by Tahrir al-Sham terrorist group. The pilot ejected himself from the jet, but was encircled and died fighting the terrorists.

The Astana peace process, one of the tracks of Syrian peace settlement, started in January 2017 and was devoted to establishing de-escalation zones and solving military issues. One of the main achievements of these talks was establishment of the de-escalation zones in the northwestern Idlib province and parts of other Syrian provinces.

The views expressed in this article are solely those of Rafet Aslantas and Oytun Orhan and do not necessarily reflect the official position of Sputnik.

000000
Popular comments
No issues with manpads before these turkeys made their way into idlib, turkey managed to collect the body of the the Russian pilot with no issues, and collecting parts of the plane with no issues... Those gosh darn turkey's are amazing with their diplomacy with these brutal terrorists.
SPF
7 February 2018, 03:07 GMT1
000000
Yes. The only unexpected (unexpected) problem for the New World Order to be finally officially established worldwide, was a Russia-Turkey alliance still in place against all odds, a very natural one (by the way) alliance, and this despite all their efforts to destroy it. The New World Order masters thought that they had been succesful in destroying that friendship, but ¡Oh, surprise! both administrations (under President Putin and under President Erdogan) play chess. It is a huge trap for the chosen/unchosen ones. HUGE. Israel is gone, which is the reason why the Pope and President Erdogan met friendly. This Pope is not a Jew, contrary to previous Vatican II Popes.
elsa.zardini
7 February 2018, 04:05 GMT1
000000
Newsfeed
0
New firstOld first
loader
LIVE
Заголовок открываемого материала
Access to the chat has been blocked for violating the rules . You will be able to participate again through:∞. If you do not agree with the blocking, please use the feedback form
The discussion is closed. You can participate in the discussion within 24 hours after the publication of the article.
To participate in the discussion
log in or register
loader
Chats
Заголовок открываемого материала
Worldwide
InternationalEnglishEnglishMundoEspañolSpanish
Europe
DeutschlandDeutschGermanFranceFrançaisFrenchΕλλάδαΕλληνικάGreekItaliaItalianoItalianČeská republikaČeštinaCzechPolskaPolskiPolishСрбиjаСрпскиSerbianLatvijaLatviešuLatvianLietuvaLietuviųLithuanianMoldovaMoldoveneascăMoldavianБеларусьБеларускiBelarusian
Transcaucasia
ԱրմենիաՀայերենArmenianАҧсныАҧсышәалаAbkhazХуссар ИрыстонИронауОssetianსაქართველოქართულიGeorgianAzərbaycanАzərbaycancaAzerbaijani
Middle East
Sputnik عربيArabicArabicTürkiyeTürkçeTurkishSputnik ایرانPersianPersianSputnik افغانستانDariDari
Central Asia
ҚазақстанҚазақ тіліKazakhКыргызстанКыргызчаKyrgyzOʻzbekistonЎзбекчаUzbekТоҷикистонТоҷикӣTajik
East & Southeast Asia
Việt NamTiếng ViệtVietnamese日本日本語Japanese俄罗斯卫星通讯社中文（简体）Chinese (simplified)俄罗斯卫星通讯社中文（繁体）Chinese (traditional)
South America
BrasilPortuguêsPortuguese
NewsfeedBreaking
05:42 GMTUK Reportedly Mulls Joining US-Mexico-Canada Trade Deal as FTA With America Stalls
05:24 GMTBrazilian Health Minister, Who Arrived at UN, Says Contracted COVID-19
04:30 GMTA Sigh That Tells It All: Golden Retriever Wants Attention
04:28 GMTLive Updates: Germany Registers 10,454 New COVID-19 Cases
04:11 GMTFlorida Gov. Orders All State Agencies to Search for Laundrie After Petito's Remains Confirmed
03:43 GMT'Nothing New on That': Bill Gates Brushes Off Question About His ‘Dinners’ With Epstein
03:33 GMTGOP Politicians Stand by US Border Patrol After Claims They 'Whipped' Refugees at Rio Grande River
03:14 GMTPele Cheers Up Fans by Posting Video of Him Riding Exercycle in Hospital
03:07 GMTAxis of Resistance Killed US, Israeli Commanders in Revenge for Soleimani's Assassination - Report
02:56 GMTPolitical Capital & GOP in His ’Grip’: Trump ’Wants Back’ in 2024, Journos Say
01:43 GMTIRGC Chief: Iran No Longer Sees US as Threat - Report
01:18 GMTChinese Covid Vaccines Reach 100 Nations, But WHO Warns Africa Still Short 470 Million Shots in 2021
01:04 GMTAwkward Moment as White House Staff Cuts Off Biden-Johnson Meeting in Mid-Sentence
00:20 GMTVideo: Military Jet Intercepts Small Aircraft Over NYC in the Middle of UN General Assembly
00:19 GMTPark Ranger ‘Implored’ Gabby Petito to Distance Herself From Toxic Relationship With Brian Laundrie
YesterdayVideos: 6.0 Earthquake Strikes Southeastern Australia
YesterdayPro-Reunification Candidate Chang Ya-chung Edges Ahead as Chairman Election in Taiwan’s KMT Nears
YesterdayTexas Governor Vows to Prevent Del Rio Migrant Surge Disaster From Being Replicated
YesterdayUber’s Business Model Faces Threat After Legal Setback Across Europe
YesterdayUS Lawsuit Challenges Alliance of 2 Airlines for Stifling Competition