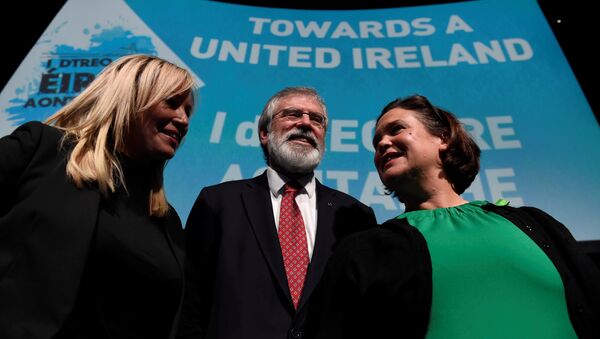 LONDON (Sputnik) - Northern Ireland should obtain a special status within the EU once the UK leaves the bloc to defend the rights of its citizens and to ensure the observance of the Good Friday Agreement, David Cullinane, a spokesman for Brexit of the region’s major political party Sinn Fein, told Sputnik.

"What we are saying here is that the North of Ireland voted to remain in the European Union [at the 2016 Brexit referendum] and that vote should be respected. What we need to do is to find ways that we can actually respect that, and our principles were very clear from the start and are what underpins our demand for special status for the North," Cullinane said.

On February 4, Sinn Fein's leader, Gerry Adams, once again called for a "special designated status" within the European Union to be granted to Northern Ireland after Brexit to avoid the hard border on the island of Ireland and the violation of rights of Irish citizens and UK citizens from Northern Ireland. Adams called Brexit a disaster for the island, arguing that the accord reached in December between London and Brussels to complete the phase one of their withdrawal talks was a "fudge" to create an illusion of progress.

As Northern Ireland voted to remain in the EU referendum by a majority of 56 percent to 44 percent, Sinn Fein considers it important to stay within the legal framework of the bloc.

"For arbitration in almost all matters to do with trade and human rights, we use the European Court of Justice and the European Court of Human Rights. What Brexit would mean is that the North comes out of purview of both those courts, with a British court potentially acting as a final court of arbitration… that in our view would be a violation of the Good Friday Agreement and so special status for the North requires us to stay within that legal (EU) framework," Cullinane explained.

In December, the European Union released a report on the progress reached between Brussels and London upon completion of phase one of Brexit talks. According to the document, the parties agreed that the absence of agreed solutions, the United Kingdom would maintain full alignment with the rules of the EU internal market and customs union in order to avoid the establishment of a hard border between Northern Ireland and the Republic of Ireland.

If the United Kingdom withdraws from the EU customs union, the only way to retain full alignment and avoid any checks at the border with Ireland would be Northern Ireland staying in the customs union and single market, Cullinane suggested.

Special status for Northern Ireland has been an increasingly heated topic in Brexit negotiations following the emergence of the Northern Irish Democratic Unionist Party (DUP) as a supporter of the Conservative government in the aftermath of the UK hung parliament after June 2017 elections.

Whereas the DUP insists on as uniform process as possible in bringing Northern Ireland out of the European Union alongside the rest of the United Kingdom, Sinn Fein claims that the economic and social complexities of Northern Ireland demand special dispensation, particularly due to the large number of Northern Ireland's residents enjoying Irish, and thus European, citizenship.

"The issue of representation is very important. We want some level of representation for the North in the European Parliament as you have to bear in mind that almost half of the people who live in the North see themselves as Irish. More and more are getting Irish citizenship and have Irish passports and as a consequence of that are European citizens," the Sinn Fein spokesman continued.

Sinn Fein wants to make sure that the Irish citizens living in Northern Ireland enjoy exactly the same rights as European citizens who live in Ireland, Cullinane argued.

"The only way you can achieve that is if you have some special legal framework put in place that's going to guarantee those rights, that's going to protect the Good Friday Agreement and also avoids a hardening of the border," Cullinane suggested.

The Good Friday Agreement, officially the Belfast Agreement, was concluded in 1998 between the UK and Irish governments and political parties in Northern Ireland to end decades of sectarian conflict that resulted in deaths of more than 3,500 people.

The 1998 deal guarantees equal rights and "parity of esteem" for all communities, allows people born in Northern Ireland to hold both UK and Irish citizenship, provides for a devolved system of government, requires paramilitary groups to disarm and normalizes the police force. The governments of both Ireland and the United Kingdom agreed to jointly uphold the agreement.