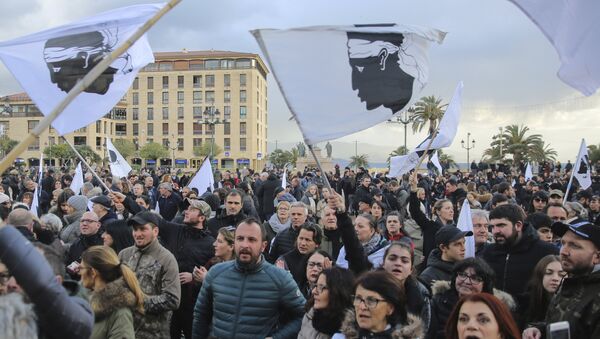 Macron’s first visit to the island as French president marks the twentieth anniversary since the assassination of French Prefect Claude Erignac, who was shot dead 20 years ago by a pro-independence activist Yvan Colonna. As a tribute, the president attended a ceremony honoring the slain politician before holding talks with nationalist leaders, Gilles Simeoni and Jean-Guy Talamoni.

"Corsica, a proud and dignified land, has been sullied by this crime," Macron said. "What took place here on February 6, 1998 can't be justified, can't be pleaded, can't be explained. A man was killed because he served the Republic."

He also stressed that there would be "no forgetting and no amnesty" for Colonna, who's serving a life sentence for murder.

Moreover, President Macron has presented his own “vision of Corsica” during the speech, emphasizing that the island is part of the "unwavering France," and promised to try give it "the future it aspires to, without giving into demands that would take it out of the Republican fold."

This comes after nationalists gained unprecedented political strength, urging him to properly address the issue of Corsica’s status. The Pè a Corsica (For Corsica) alliance received two-thirds of the seats in the regional assembly.

In contrast to Catalonia, Corsica is not pushing for an independence referendum, but is calling for constitutional changes that will give the island a special status with “real autonomy.” While Macron has previously said that he is open to dialogue, he, however, ruled out making any changes to the constitution, thus effectively rejecting Corsicans’ major demand that the Corsican language be given official status.

Nationalists are also demanding an amnesty for Corsicans jailed on the mainland for pro-independence violence and a change in housing rules, so that only people who have lived on the island for five years are permitted to buy property there.

READ MORE: Violence in French 'Jungle': 'Any Passerby Can Be Taken Down by Stray Bullet'

Earlier this week, Simeoni said on the RTL radio that Macron’s visit opened a "historic window of opportunity to end the cycle of conflict."

On February 4, the nationalist camp staged a peaceful rally in Ajaccio, the island’s capital, to press their demands, with nearly 25,000 people attending the march.