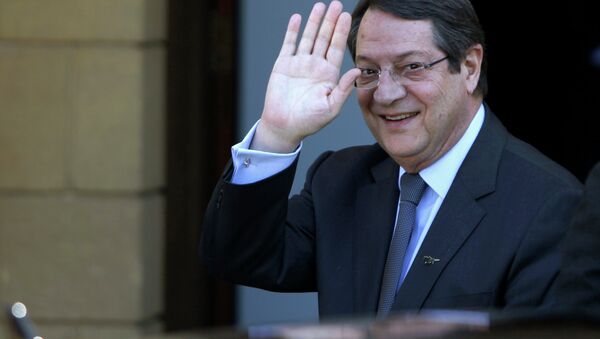 MOSCOW (Sputnik) - There is a chance of some effort being applied to holding another round of talks on Cyprus settlement after Cypriot incumbent President Nicos Anastasiades won in the second round of the presidential election on Sunday, receiving 55.99 percent of the votes.

Anastasiades' rival Stavros Malas from the left-wing Progressive Party of Working People (AKEL) gathered 44.01 percent of the votes. The voter turnout was recorded at 73.97 percent. The swearing-in ceremony is scheduled for February 28.

Nine candidates were registered for the participation in the first round of the presidential vote that was held on January, 28. Nicos Anastasiades received 35.5 percent of the votes and Stavros Malas got 30.25 percent. As none of the candidates got the majority of the votes, the second round was held on Sunday.

Cyprus political experts told Sputnik that the resumption of Cyprus settlement negotiations is likely following Anastasiades assuming presidential office for the second term, but with low chances of reaching an agreement.

Dr. Zenonas Tziarras, a post-doctoral researcher at the Department of Social and Political Sciences of the University of Cyprus, told Sputnik that January's general election held in the Turkish Cypriot community and UN readiness to provide the necessary support could promote holding a new round of reunification talks.

"Given the stabilization of the Turkish-Cypriot administration after the recent general elections, it is possible that there will be another effort to maybe restart negotiations. The UN is open to the possibility and ready to help," Dr. Tziarras said.

The expert stated that it would, however, be very difficult for the parties to reach an agreement during the talks given the remaining unresolved issues and tense relations amid the failure of the last round of negotiations in Swiss Crans Montana in 2017.

Ioannis-Sotirios Ioannou, an analyst at the Diplomatic Academy of the University of Nicosia, told Sputnik that first reaction of the leader of the Turkish Cypriot Community Mustafa Akinci on Anastasiades re-election demonstrates a low level of trust between the two leaders after the Crans Montana talks failure. The fact that the negotiator from the Turkish Cypriot side has still not been appointed also does not contribute to reaching an agreement, he added.

"UN would definitely try to re-launch the negotiation process and I give a small window (maybe the last one) of opportunity but I strongly believe that stakes of a possible breakthrough remain low," Ioannou said.

The negotiations on Cyprus reunification resumed in 2014 after a two-year pause, but the sides have not reached an agreement. The latest round of talks on the Cyprus settlement under UN auspices took place in Swiss Crans-Montana, between June 28 and July 7. The parties failed to reach an agreement during these negotiations and a new round has not been scheduled yet.

Anastasiades is expected to oversee ongoing search and drilling for gas and oil off the island's southern coast to boost economic growth.

On Friday, Cypriot Minister of Energy, Commerce, Industry and Tourism Georgios Lakkotrypis announced the discovery of a potential significant gas reserve during drilling by Italian company ENI in a field named Kalypso in the island’s exclusive economic zone (EEZ), but noted that more time was necessary to make final conclusions.

"Indications of a big finding in the "Kalypso" field would put Cyprus again on a leading role in the SE Med as a strong gas exporter. But a possible crisis, with Turkey, could be easily occurred within the next months as Ankara is directly placing a grey zone to 'block 6,' claiming that part of the Cyprus EEZ is belonging to the Turkish continental shelf", Ioannou said.

The expert concluded that given Turkey’s strong opposition to drilling in Cypriot EEZ it is impossible to predict whether natural gas will further boost the island’s economy or would turn into a new source of problems.

Dr. Tziarras shared the point of view on the positive effect of gas fields on the island’s economy, also stressing the importance of other sectors for economic development.

"More gas findings would surely help in the overall energy strategy of the Republic of Cyprus as well as enable exploitation and even exportation. However, emphasis should be given in parallel to the primary economic sector with well-thought strategy and targeted incentives," the expert said.

Dr. Tziarras added that more support should be given also to research and innovation as well as entrepreneurship in addition to improvements in the tourist sector.

Offshore gas reserves to the south of the Cyprus coast were discovered by US Noble Energy company in 2011. Cyprus has given oil and gas exploration licenses for several offshore blocks to French Total, Italian Eni and US ExxonMobil.

"Anastasiades’ foreign policy would remain orientated towards a balance between EU, regional actors and Russia and would further develop as a tool of the so-called 'Trilateral Diplomacy' by adding new states in the area," the expert said.

Nevertheless, Ioannou added that energy diplomacy could be easily added as a new direction of Cypriot foreign policy.

Dr. Tziarras expressed the same point of view on keeping the same course in foreign policy.

"In foreign policy, the Anastasiades administration will try to maintain the balance between its pro-Western orientation and relations with Russia. It will also try to develop further the "diplomacy of trilateral partnerships" in the Mediterranean with more openings to countries such as Lebanon and Italy," the expert said.

Dr. Tziarras noted that the president’s administration will try also to play a pro-active role on a diplomatic level as well as to contribute to the broader security and energy planning of the region.