Violence in French 'Jungle': 'Any Passerby Can Be Taken Down by Stray Bullet' 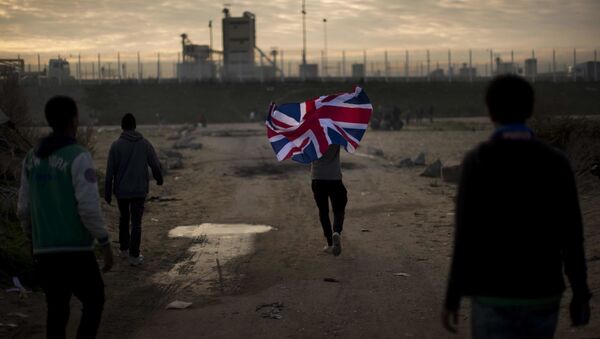 Last week’s clashes between illegal migrants in Calais stem from the Afghan community’s desire to control migrant transport routes across the English Channel, a police representative has told Sputnik France.

A massive fight involving more than 100 Eritrean and Afghan nationals broke out on February 1 in the French port city, with four people suffering critical gunshot wounds and dozens injured.

Macron Calls for French-UK Approach to Settle Issue of Calais Child Refugees
The clashes between Afghan and Eritrean migrants living in and around the northern French city overlooking the English Channel have turned the city’s streets into a real battleground.

“Any passerby, any citizen can be taken down by a stray bullet,” Bruno Noel, the regional head of the police trade union Alliance, told Sputnik, adding that an international network of illegal migrant traffickers was behind last week’s violence.

”Most of this illegal trafficking is done by Afghans. The Eritreans refused to play by their rules and, arming themselves with metal rods, they decided to come down hard on the traffickers,” Noel said.

On Friday police were on the lookout for an Afghan suspected of shooting two Eritreans, aged between 16 and 18.

According to human right groups, there are an estimated 800 migrants currently residing in Calais and willing to cross into Britain.

France has repeatedly called on the United Kingdom to engage more actively in tackling the issue and resettle more unaccompanied child refugees who want to reunite with their families in Britain.

Over the past few years, several minors have died after attempting to illegally cross the English Channel from Calais to the United Kingdom due to months-long delays in the legal family reunification procedure.

The situation has prompted concerns of human rights groups in both the UK and France.