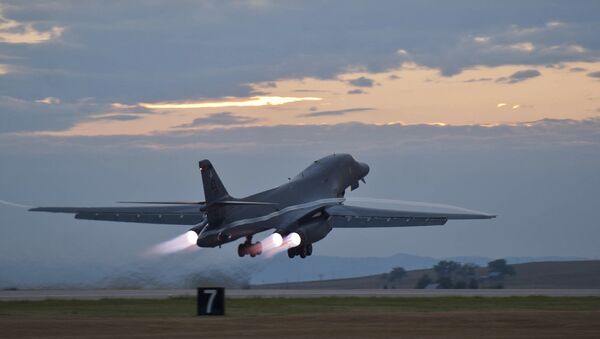 The newly-released US nuclear doctrine poses a challenge to global peace and stability, Colonel Rafael Gonzalez Crespo, a military analyst and specialist on Eastern Europe, has told Sputnik, warning that Washington's approach to nuclear warfare may turn Europe into a large-scale military theater.

Most of the security threats mentioned in the new US Nuclear Posture Review are imaginary, Colonel Rafael Gonzalez Crespo, a military analyst and specialist on Eastern Europe, told Sputnik Mundo.

"The US justifies the need for steps described in the [nuclear] doctrine by threats coming from a number of countries," the colonel said. "It is worth to be mentioned that laws of all countries determine [the term] of an external threat and the principle behind the response to it similarly. First, one can speak about illegal aggression only if it was not motivated or provoked. The US claims that Russia's military assertiveness is growing but remains silent about NATO's expansion towards Russia's borders and the alliance's increasingly provocative military drills, particularly, in the Black Sea."

World
US Nuclear Doctrine Will Launch New Spiral of Arms Race - German FM
Crespo underscored that Russia's actions to boost its defenses is nothing but a tit-for-tat response to the actions of the US and its allies. Thus, the idea of a threat coming from Russia does not hold water, he pointed out.

What seriously disturbs the military analyst about the new American doctrine is the possibility of using atomic weapons in response to non-nuclear attacks. This runs counter to laws which say that a military response should be proportionate, Crespo highlighted.

"This doctrine obliterates all international laws and agreements in the field of conventional and nuclear weapons," the colonel said. "When a country that signed these international documents declares readiness to use nuclear weapons even in cases prohibited by these documents, other countries have no alternative but to stop adhering to these agreements."

According to Crespo, the US nuclear doctrine poses a serious threat to international stability.

The analyst argues that while Washington depicts itself as the guarantor of international security, in reality it is the US who undermines the world's safety: "Perpetual military exercises in Europe, in the South China Sea, off the coast of North Korea […] have nothing to do with peace and stability, quite the opposite."

Russia
Moscow Identifies Reasons Behind New US Nuclear Doctrine
Referring to concerns voices by top EU officials about the US nuclear strategy, the colonel noted that the EU response should be "much more clear and unambiguous," since the risk that Europe may again turn into a large-scale military theater, with the use of nuclear weapons as well, has seriously increased.

"I don't exclude that [US President] Donald Trump doesn't support the growing aggressiveness of the US foreign policy," Crespo remarked. "Apparently, he cannot control the situation. Perhaps, he is a good businessman, but one can't to say the same about his ability to rule the state. [Presidency] requires entirely different skills which he, in my opinion, lacks."

The colonel noted that although Trump won the 2016 presidential elections, those Americans who voted for him do not influence US domestic and foreign policy in any way. At the same time, Trump does not have support from the US establishment that holds the reins of the country's military forces and other key state institutions.

On February 2, Washington released the new US Nuclear Posture Review, which named Russia, North Korea, Iran and China as potential threats to America's national security and envisaged the possibility to use atomic arms in "extreme circumstances."

Commenting on the US document, the Russian Foreign Ministry rejected the US accusations of aggressive behavior, interventions, breach of arms control agreements, and called upon Washington to engage in a joint search for solutions to problems related to maintaining strategic parity.

The views and opinions expressed by Rafael Gonzalez Crespo are those of the analyst and do not necessarily reflect those of Sputnik.