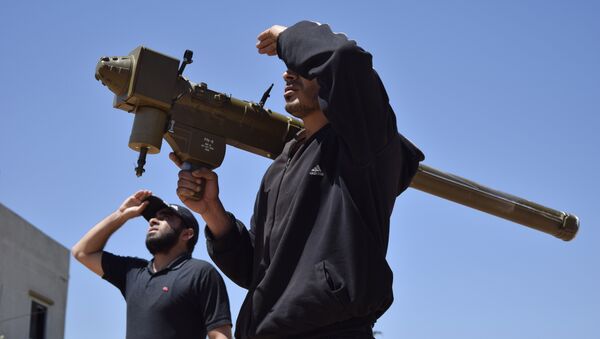 "When President Vladimir Putin spoke about the completion of the active stage of the operation to support the armed forces of Syria in their counter-terrorism work, he said that the ready and remaining potential of the Russian armed forces in the areas of their temporary deployment is sufficient to conduct devastating retaliation. We are talking about exactly such surgical strikes, " Peskov told journalists.

Commenting on the actions of the Russian armed forces in Syria over the weekend, the spokesman recalled the report of the Russian Ministry of Defense, saying that more than 30 militants were destroyed as a result of a group strike by high-precision weapons in the province of Idlib, controlled by the Jabhat Fatah al-Sham terror group (banned in Russia), from where a missile was launched on the downed Su-25.

Speaking about the strikes, Peskov noted that these actions were provoked by their attack on the Russian Su-25.

"They [the strikes] were provoked by a tragic accident, when our plane was shot down by terrorists, the pilot died as a hero, we all offer our condolences to the pilot's relatives and friends and are proud of our heroes. Naturally, this tragic incident was followed up by decisive action to suppress terrorist activity," the presidential press secretary stated.

The aircraft was shot down on Saturday, February 3, by the Tahrir al-Sham terrorist group, linked to former terrorist al-Qaeda branch in Syria. The pilot ejected himself from the jet, but died after a subsequent battle with terrorists. According to the latest statement by the Russian Defense Ministry, he blew himself not to be taken captive by militants.

READ MORE: Pilot of Russian Su-25 Blew Himself Up After Being Encircled by Terrorists - MoD

On February 4, the Syrian Special Forces started a military operation in the area with the support of the Russian air forces.