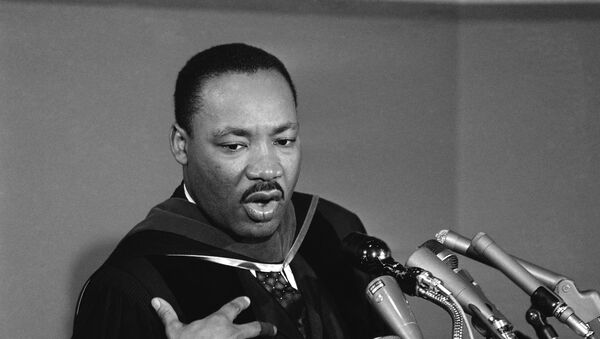 © AP Photo / Charles Tasnadi
Subscribe
International
India
Africa
A Super Bowl commercial, that was supposed to be inspiring, has come under fire for its use of the speech of the “biggest dreamer” Dr. Martin Luther King, Jr.

The ad was aired on Sunday for Chrysler’s Dodge Ram Trucks, and used the voice of the civil rights activist as well as his powerful 1968 speech to promote the vehicle’s “built to serve” tagline.

Dr. King’s youngest daughter Bernice King immediately denounced the advert and the move itself, having taken to Twitter through The King Center, the official living memorial to MLK, founded by his wife Coretta Scott King to advocate nonviolence.

Neither @TheKingCenter nor @BerniceKing is the entity that approves the use of #MLK’s words or imagery for use in merchandise, entertainment (movies, music, artwork, etc) or advertisement, including tonight’s @Dodge #SuperBowl commercial.

Social media users, who cherish King’s memory, joined his family in complaining, saying that such a powerful speech should not be commercialized:

Such a sad day when a powerful message is used to sell a truck that does environmental harm and cost way too much to own. Next time make sure the entity partners with civil service groups

Trivialization is the issue. Dr. king was explicitly against this sort of hucksterism. And I’m an ad woman.

They imagined what it would be like if King took part in the advert:

"Please use me to sell trucks."
— Martin Luther King Jr.

"i have decided to stick with love, and also dodge, because my message has been sanitized so much that it now supports loud overpriced trucks for white people"

“I have a dream! That Ram Trucks will be bought by everyone watching the #SuperBowl!” — actual quote by Martin Luther King Jr (totally real)