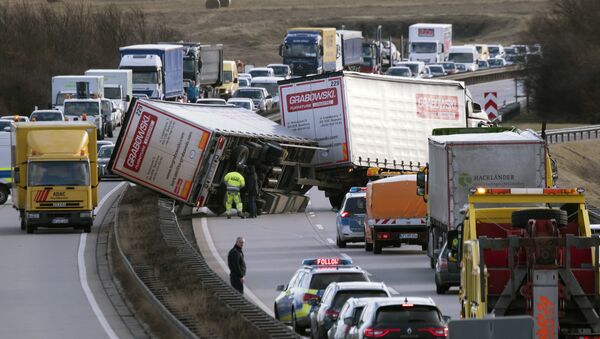 Bogus car insurers in the UK are offering "too good to be true" prices. So-called "ghost brokers" sometimes register rural addresses on cars owned by people in cities in order to get lower premiums but the insurance certificates they produce are therefore worthless.

Motorists in Britain have been warned about fraudsters who pose as genuine car insurance companies and trick people into forking out money for worthless pieces of paper.

The City of London Police launched a national awareness campaign on Monday, February 5, about the threat posed by "ghost brokers."

The force, which traditionally specializes in investigating financial crimes, said thousands of people could be at risk of being prosecuted for driving without insurance.

Today marks the start of our campaign warning motorists like you about fraudsters, aka ghost brokers, selling fake car insurance. #SteerClearofFraud and make sure your cover is legit — here’s how: https://t.co/3ImFHZ5fjx… pic.twitter.com/BXJazpyApj

​One ghost broker, Renan Gomes, 33, from Epsom, near London, was given a suspended prison sentence in 2016 for setting up 133 fraudulent car insurance policies. Many of his victims were, like Gomes, from Britain's Portuguese community.

Another fake insurer, Azeem Hussain, 19, from Walsall, near Birmingham, was jailed for 12 months after he offered insurance through the Gumtree website.

Many "ghost brokers" are able to offer much lower car insurance prices than genuine companies because they register policy holders' cars to addresses in the English countryside, which naturally attract much lower premiums.

All is well until the car owner has an accident, has their vehicle stolen or is stopped by the police and asked for their insurance documents.

City of London Police said people should check their car insurance is bona fide and have warned drivers with bogus documents could face having points put on their driving license, fixed penalty notices and even claims for thousands of pounds in costs if they are involved in an accident.

The most likely victims are men, aged 20-29, who sometimes have difficulty finding insurance, especially if they already have points on their license for speeding or other road use infractions.

"Ghost brokers trick unsuspecting victims with offers of heavily discounted car insurance, leaving them with a policy that isn't worth the paper it's written on and open to the severe harm that comes with driving without valid insurance," said Detective Chief Inspector Andy Fyfe, Head of the City of London Police's Insurance Fraud Enforcement Department.

The @CityPoliceIFED has launched a campaign warning about the dangers of buying fake car #insurance from fraudsters, also known as ‘ghost brokers’. #SteerClearOfFraud https://t.co/XmySImhw6m pic.twitter.com/ox3hva2Svi

​"While an offer of cheap car insurance may seem tempting, falling victim to ghost broking will end up costing you far more in the long run — both in terms of money and your license," he added.

"Ghost brokers often target vulnerable people or communities, but we do also sometimes see cases where people have knowingly bought fraudulent or invalid policies in an effort to pinch the pennies," said Ben Fletcher, Director of the Insurance Fraud Bureau.

Motorists in the UK who are unsure about whether an insurance broker is genuine can check on the websites of the Financial Conduct Authority or the British Insurance Brokers' Association.

Alternatively they can check on the Motor Insurance Database website to see if their car has actually been legitimately insured.