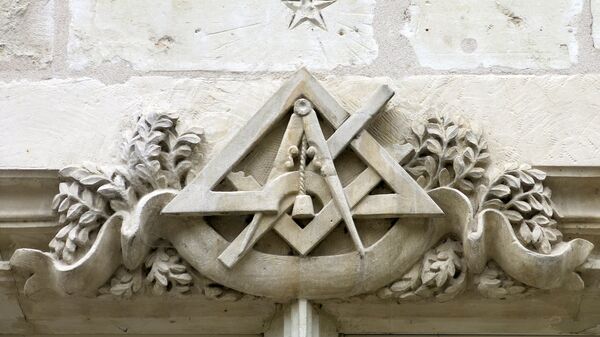 According to The Guardian, Masonic lodges for MPs, peers and political journalists are established in the UK Parliament, and those lodges have allegedly been operating secretly within Westminster. Sputnik has discussed the issue with the United Grand Lodge of England (UGLE).

Mike Baker, UGLE Director of Communications, has denied that Freemasonic lodges operate secretly in Westminster and noted that any speculation that the fraternity could "wield political influence" was "misleading."

“All the lodges quoted in the Guardian Article meet in our headquarters in Covent Garden which is open to the public all year round. In addition, it is strictly forbidden to discuss politics or religion at our meetings so any suggestion that these lodges wield political influence is again misleading.  We have members from all walks of life, all backgrounds and faiths from Trade Union leaders to City Directors, covering all political views. By the very nature of this inclusivity, the idea of UGLE wielding political influence is a non-sense.”

Baker revealed the main positive argument for Freemasonry, claiming that members are “driven by integrity” and a desire to help people, as well as to “stem the flow of negative perceptions which has unfairly dominated public opinion.“

“The House of Commons Home Affairs Select Committee, examining Freemasonry in the Police and Judiciary, stated that ‘It is obvious that there is a great deal of unjustified paranoia about Freemasonry’ and we at the United Grand Lodge of England would wholeheartedly agree.”

He also shared what the main values cultivated within members are, putting prime focus on “the Faith”:

“Freemasonry builds people into better moral beings.  We use the analogy of crafting a great building to represent building ourselves into better people and this is what our ceremonies are based upon.  Freemasonry is rooted in the morality of the Faith belonging to each individual member, and it teaches its members to do what is right.“

While addressing Masonic values, Baker noted that corruption, fraud, dishonesty was something unheard of for them, highlighting that anyone who did not abide by the rules or “fell short of high standards of conduct,” would be sanctioned for “Bringing Freemasonry into Disrepute” and expelled.

Baker said that UGLE was looking forward to a day when Freemasons could disclose their membership “without fear of retribution, suspicion or damage,” as a majority of them had to be cautious in the face of looming prejudice and discrimination.

“When Freemasonry is once again recognized for its moral courage, and that Freemasons are properly looked upon as upright and decent individuals whose conduct is rooted in both integrity and service to others, then those members in the more sensitive professions will feel able to declare their membership openly.“

The Guardian report suggested that three Masonic lodges are secretly operating in Westminster; the New Welcome Freemasons’ Lodge was set up for MPs, peers and parliamentary staff, the Gallery Lodge was established for the political press corps, and the Alfred Robbins Lodge, which was also created for journalists. Members of parliament, peers and political journalists are not obliged to disclose their Masonic membership, although they can do that voluntarily.

READ MORE: Truth Will Out: Freemasons Call the Shots in Swedish City