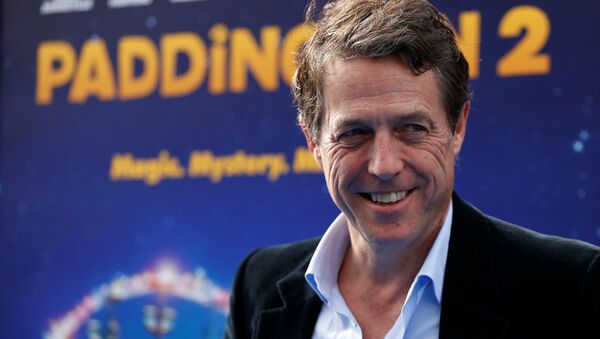 Leading British actor Hugh Grant has settled a legal case against a UK newspaper publisher after the company admitted its reporters had hacked into his voice-mails over a 10 year period in order to get exclusive stories about him.

The showbusiness star — famous for his roles in the internationally popular movies "Four Weddings and a Funeral" and "Notting Hill" — is understood to have won substantial damages, believed to be a six-figure sum, from Mirror Group Newspapers, it was announced on Monday, February 5.

Within hours of the news, UK television presenter Piers Morgan, a former editor of the Daily Mirror, took to social media to post a police mugshot photograph taken of the actor after he was arrested in Los Angeles having been caught having sex in a car with a prostitute in 1995.  It was a move later roundly condemned by many other social media users.

It is believed the actor plans to donate the money to Hacked Off, a group that campaigns against press intrusion.

Grant had been among a number of high profile victims of phone-hacking by journalists, a practice that became widespread at some of Britain's fiercely competitive tabloid newspapers which was later exposed during a major scandal in 2011.

Most of the focus centered at the time on the News of the World, the biggest-selling Sunday tabloid, owned by media mogul Rupert Murdoch, who later closed it down at the height of the hacking scandal.

Later it emerged that phone-hacking had also taken place at the Sun, another Murdoch title, as well as the Daily Mirror, Sunday Mirror and Sunday People all owned by MCN, which is part of Trinity Mirror.

The complaint raised by Grant related not just to phone hacking, however, but also to surveillance and blagging, a method whereby reporters would pose as other people to coax private information out of sources who did not realize they were speaking to the press.

so its ok for your organisation to lie and cheat but not Hugh Grant to defend his right to privacy. double standards comes to mind

​brilliant speech, succinct analysis of everything that has gone wrong with journalism by @HackedOffHugh https://t.co/ITiN9cBVMt

In a statement after it was confirmed by his lawyer the matter had now been settled, Grant said: "This case was not just about what they did to my phone and those close to me… This litigation has made clear that phone hacking and other unlawful information-gathering took place on an industrial scale at the Daily Mirror, Sunday Mirror and Sunday People.

Grant, who named several former editors of the three Trinity Mirror titles, including Morgan said: "Those journalists have paid the price for the wrongdoing of executives who have left with large pay-offs and share options. "

Fuel to the Fire: Actor Kevin Spacey's Reported Racism Charges Inflame Twitter
Anjlee Saigol, of Taylor Hampton Solicitors, who represented Grant, told the judge: "Mr Grant brought this action in relation to alleged illegal misuses of his private information, obtained by hacking into his voicemails, as well as blagging and surveillance, committed by MGN's journalists at all three of its newspapers over, as MGN now accepts, many years."

The lawyer added: "Although Mr Grant now has some clarity as to the extent of MGN's unlawful activities in relation to him, one of his principal reasons for pursuing this case was to uncover and establish the wider truth about MGN's investigations into and knowledge of its unlawful activities before it finally admitted these practices in September 2014."

A statement agreed by both parties, read out by Saigol in court, outlined that Mirror Group Newspapers admitted its senior journalists had "encouraged or actively turned a blind eye to the widespread culture of unlawful information gathering activities" at its newspapers.

"MGN admits that its repeated and prolonged intrusions into innocent people's lives over, in some instances, a decade, could have been prevented or interrupted," she added.

Alex Wilson, for Mirror Group Newspapers, said: "MGN accepts that the unlawful interception of voicemail messages and procurement of private information about the claimant and others should never have happened. MGN acknowledges that was morally wrong and deeply regrets the wrongful acts of its former employees which caused damage and distress to those affected."

The judge heard also details of settlements against Mirror Group Newspapers by the actor Ralf Little and Rupert Lowe, who was the executive chairman and joint managing director of Southampton football club between 1999 and 2006. Both men received undisclosed damages payouts and apologies from MGN.