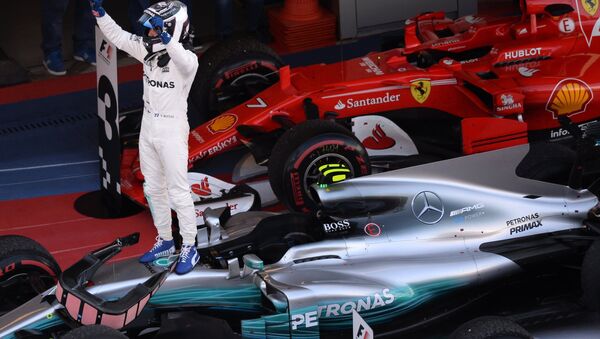 The controversy surrounding the decision by Formula 1 bosses to ditch the traditional "grid girls" has taken a surprising new twist - as they will now be replaced by youngsters with links to motorsport racing.

Called "grid kids" — around 20 of them will be employed at every grand prix, with the children either being young karters or aspiring racing drivers.

They will all be chosen by the individual national sporting authority which hosting the race at the time, and will get the chance to meet the various drivers and their respective teams.

Announcing the news on Monday, February 5, F1 chiefs say it will make the build-up to the races "more relevant and interesting for fans, especially the younger ones."

GRID KIDS: The next generation of F1 fans will now have a chance to line-up alongside their heroes on race days, ahead of lights out… ⬇️ https://t.co/r50zFbdetC

The W09 is more than a machine. It carries the passion and drive of an entire racing team. This is when it starts to become reality…#W09Countdown pic.twitter.com/bOMQcZwWVI

Sean Bratches, F1 commercial chief, said: "This will be an extraordinary moment for these youngsters: imagine, standing beside their heroes, watch as they prepare to race, the elite of the elite in motorsport, to be there, alongside them in those precious few minutes just before the start.

"What an unforgettable experience, for them, and their families. An inspiration to keep driving, training and learning so that they can dream of one day being there themselves. What better way to inspire the next generation of Formula 1 heroes," he added.

Jean Todt, president of the Federation Internationale de l'Automobile, the governing body, said: "Formula 1 is the pinnacle of motor sport and the dream of every young racer competing in the junior series that make up the FIA's single-seater pyramid, from karting all the way to F1. We are therefore delighted to bring that dream a little closer by giving the future champions of our sport the opportunity to stand alongside their heroes on the grid in the build-up to the race start."

Child mascots have long been a common feature in football, with youngsters accompanying players on the walk from the tunnel to the pitch in World Cup and European championship fixtures. It is also a common sight at many soccer league games across the globe as well.

So all grid girls have been sacked from Grand Prix events because getting paid for promoting a sport and looking beautiful is a ‘shameful occupation’ for women according to feminists, who also believe that prostitution and menstruating on the pavement is a form of liberation.

If you want to go down this path of banning ‘grid girls’, then you’ve got to bin beauty pageants, lingerie ads and anything where a woman looks remotely desirable. Magic Mike films grossed 289.7 million USD. Objectification of the sexes occurs BOTH ways. Let’s not forget that.

The news comes just days after F1 bosses confirmed it was ending its longstanding practice of using walk-on glamour models at race tracks around the world.

Despite being an integral part of sexing up the image of motor-racing for several decades, the sport announced it was ditching them when the new 2018 season gets underway in Australia in March.

The announcement by Liberty Media, the sport's American owners, followed in the footsteps of darts chiefs. who said it would no longer be using walk-on models at its events amid the growing clamour by the sports world not to objectify women following a campaign by so-called snowflakes.

The decision has sparked mixed reaction on social media with some supporting it, while others say it is complete madness to lose the models.