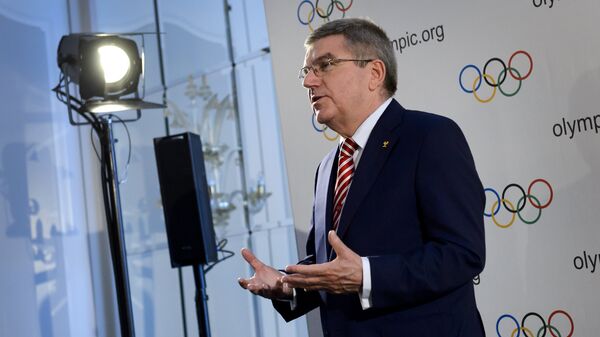 MOSCOW (Sputnik) - President of the International Olympic Committee (IOC) Thomas Bach believes that the Court of Arbitration for Sport's (CAS) recent decision to overturn life bans given to over two dozen Russian athletes has demonstrated a need for reform in the internal structure of the court.

Bach said during a press conference on Sunday that CAS should conduct reforms in a way that ensures its rulings are consistent and of high quality.

"We feel that this decision shows the urgent need for reforms in the internal structure of CAS. That means in particular that CAS has to change its structure in a way that it can ensure, and that it can better manage the quality and the consistency of its jurisdiction," Bach said.

The IOC official noted that the organization had already discussed the idea of reforms with CAS and expressed hope that the court would implement them.

Bach also mentioned the issue of the reallocation of medals received by Russian athletes at the 2014 Winter Olympics in Russia's Sochi. The IOC annulled the results several Russian athletes had obtained at Sochi Games over alleged doping violations by these athletes. Bach said in December that the medals these athletes had received would be reallocated to other athletes during the upcoming Pyeongchang games.

"With regard to the reallocation of medals, we have to wait until all legal remedies are exhausted. That means that we have to wait at least 30 days after these athletes have the reasoned decision by CAS. And this is why we are so disappointed and unsatisfied with the fact this reasoned decision does not exist… Therefore, unfortunately, here in Pyeongchang this reallocation of medals cannot happen yet," Bach explained.

Speaking further, the committee's head that the IOC hadn't received $15 million from the Russian Olympic Committee (ROC) yet for the development of global anti-doping system.

Sports Journalist: It’s Clear Who Benefits from Russia’s Olympic Exclusion
On Thursday, CAS revealed that it had ruled to uphold the appeals of 28 Russian athletes against the IOC Disciplinary Commission's decisions on their disqualification and ban from the Olympics for life over violating anti-doping rules, and partially upheld the remaining 11 appeals.

The IOC, however, said it regretted the CAS decision, and expressed plans to carefully consider CAS' arguments once they have been made available for a possible appeal to the Swiss Federal Tribunal.

Last December, the IOC suspended the Russian Olympic Committee over an alleged state-sponsored doping scheme in the country, while the Russian authorities have denied the allegations. The IOC also prohibited the Russian athletes to compete under the national flag in the upcoming 2018 Winter Olympics, saying that only "clean" athletes, to whom special invitations are extended by the IOC, may participate in the gasmes under a neutral flag.