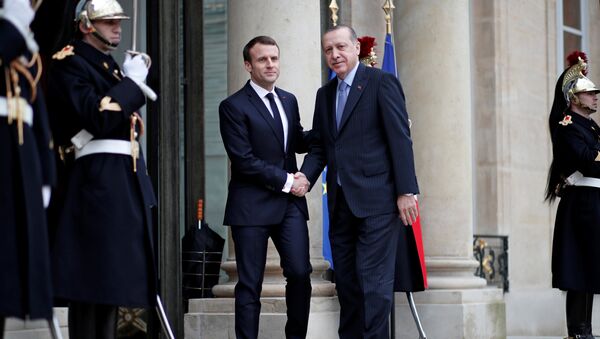 "The two presidents agreed to work on a diplomatic road map for Syria in the coming weeks. To that end, discussions between France and Turkey, which both hope for a political solution overseen by the UN, will increase in the coming days,” the Élysée Palace said in a statement.

Days after Turkey’s campaign kicked-off in the Syrian city of Afrin, President Macron expressed his concerns over offensive and the deteriorating situation in Syria.

"If it turns out that this operation takes a turn other than to fight a potential terrorist threat to the Turkish border and becomes an invasion operation, [then] this becomes a real problem for us," he told Le Figaro.

Turkish Prime Minister Binali Yildirim was quick to respond to Macron’s remarks, saying that the French president had a “flawed understanding” of Ankara’s anti-terrorist campaign in Afrin.

“The whole world knows and should know that Turkey does not operate with the mentality of an invader.”

While the prime minister’s reaction may have seemed harsh, Erdogan, according to the Turkish Anadolu news agency, sought to reassure Macron that Ankara has no eye on Syrian territory.

Since January 20, Turkey has been conducting a military operation, dubbed “Olive Branch,” in Syria’s Afrin, which is controlled by the Syrian Democratic Forces-affiliated and US-backed Kurdish People’s Protection Units (YPG). Ankara believes the YPG has ties with the Kurdistan Workers’ Party (PKK), which has been waging an armed conflict in Turkey in a bid to seek autonomy for the Kurds in the country.
Damascus has called the operation a violation of the country’s sovereignty.

The campaign was launched following the US decision to start training a 30,000-strong border security force in northern Syria, formed mainly from YPG fighters.