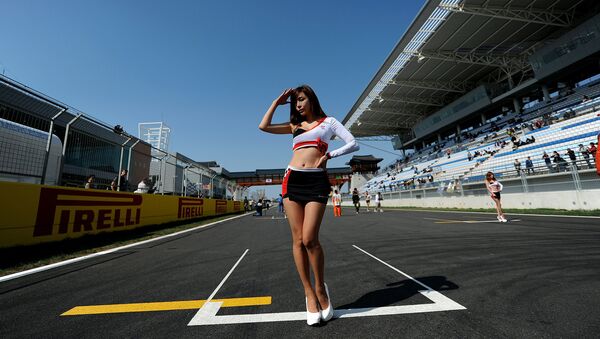 An ex-Formula One model and former Miss England finalist claims that the recent decision to ban female models from being so-called grid girls next season is an example of “feminism gone too far.”

Actor and model Kate Elizabeth Hallam (34) was a grid girl for McLaren Mercedes driver David Coulthard at the 2004 British Grand Prix at Silverstone. In a Facebook post this week, Hallam wrote that the ban will "put a lot of young ladies out of a job that they love."

British Formula One Hero Lewis Hamilton in Race for Knighthood

"I feel these decisions are made by women that would never have the confidence to do such a job, which also, believe it or not, requires a great personality," said Hallam, the South China Morning Post (SCMP) reported.

"[These women] would possibly wear knitted cardigans and cannot really achieve a glamorous look, they are also quite possibly fed up of their husbands' eyes averting to such women so instead decide to put a lot of young ladies out of a job that they love," she added.

This week, Formula One decided to do away with its tradition of grid girls in the wake of the global #MeToo movement and numerous high-profile cases of sexual misconduct in Hollywood and in governments around the world.

"I was the only British grid girl that season [2004], that was back in the day when things were not all so uptight, the days where you did not feel like you were treading on egg shells and could be you and shine," Hallam said, who also won a bravery award from the House of Commons by donating bone marrow to her brother, who had leukemia, and saving his life.

When asked if she thought grid girls were viewed as sex objects, Hallam responded, "Not at all. Everybody has a job to do and there is a lot of respect. We are making it an issue now and it should not be one. It has all been blown out of proportion if you ask me."

"I feel the majority of girls in this industry would agree there is not a problem, the only problem is now with these recent decisions," she added.

"Surely the ladies back in the 60s who fought for our mini skirts did not do so in vain? We all shout about the vote and the ladies who fought for it and I want us all to remember that," she declared, while also noting that her grid girl experience gained her other modeling assignments.