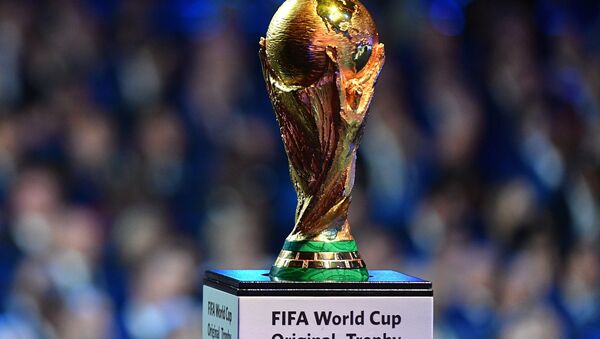 Hong Nali, who is now 80, recounted how she had learned professional skills from her foreign colleagues, about her victory at a photo contest in the United States and how photography had  made her life worth living for.

“I was already 40 when I started working as a professional photojournalist. At first I wasn’t too crazy about the job, but as soon as I got the hang of it I got hooked. I was especially successful taking photographs no one else had made before. No one would be able to do it the way I did no matter how hard they tried,” Hong said.

Sputnik Photojournalist Wins World Press Photo Award
“I think that photography is about one’s ability to harmonize wisdom and skills,” she added.

She recalled how she photographed then IOC president Juan Antonio Samaranch who was in Shanghai attending the opening ceremony of the 1st East Asian Games in 1993.

“Using my Canon camera I took a close-up picture of Samaranch pressing a yellow pen in the shape of the Great Wall of China against his lips. Xinhua news agency later put the photo on the  cover of a magazine. It made me feel so proud and happy that no one else had managed to take a photo like that,” she mused.

When asked how she managed to become the winner of a photo contest in the United States, Hong Nali said she had taken the photo of a “dancing dragon” during a rehearsal for the opening ceremony of a 1992 sports event in Shanghai.

“Seeing the picture, the Vice President of the Shanghai Photographers’ Association advised me to take part in a national competition. I did, but I didn’t get any award. A very seasoned member of the Association then told me that I would be a hands-down winner of the ‘Popular Photography’ contest in the US. I thought I had no chance there. Besides, I was supposed to describe the photo and the shooting technique in English, which I couldn’t. The head of Xinhua agency’s photography department gave me a hand and, a month later, I got a letter from the US telling me that they had awarded me the first prize. I am the second Chinese citizen to ever win this contest,” she noted.

When asked if she would like to come to Russia for this year’s World Cup, Hong Nali said it would be great.

“I’d love to. As long as I am able to take photographs, I would like to come to the championship and join young fans at the stadium,” she said.