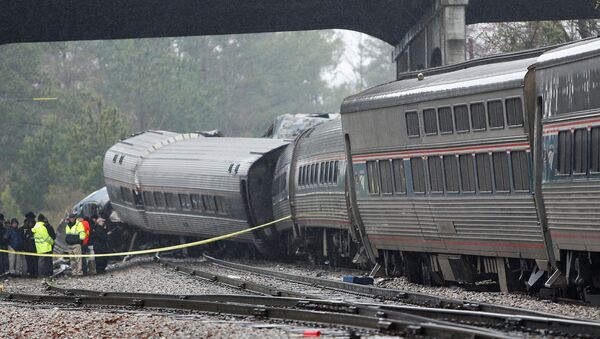 Train Derails Between New York and Miami: Two Dead, 116 Injured - Reports
CSX, the rail freight carrier tasked with maintaining switching and scheduling on the train tracks where the Amtrak passenger train struck a parked and unattended freight train, is responsible for the deaths of the engineer and conductor early Sunday morning, claimed the state-run rail operator.

Early estimates reported at least 116 passengers had been taken to the hospital with injuries, some serious.

A statement released by Amtrak noted that the organization is cooperating with a National Transportation Safety Board (NTSB) investigation into the fatal crash.

The passenger rail company released a statement noting that it is ‘deeply saddened' by the deaths of its employees, according to the Associated Press.

CSX did not immediately return email and telephone inquiries following the tragedy. Police report that the CSX freight was unoccupied at the time of the high-speed crash.

An initial statement by South Carolina Governor Henry McMaster claimed that "it appears the Amtrak was on the wrong track" and the unattended CSX train "was on the track it was supposed to be on," leading to suspicions that the Amtrak train was incorrectly switched by the freight carrier.