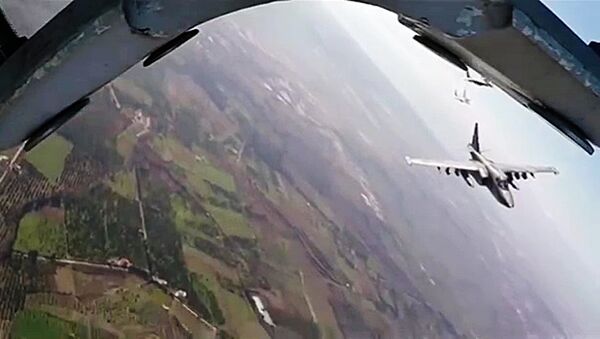 © Photo : Russian Defense Ministry
/
Go to the photo bank
Subscribe
The Russian Ministry of Defense stated that the country's air forces conducted a high-precision group strike in the area controlled by Jabhat Fatah al-Sham militants in Idlib, from where a missile that downed Russian Su-25 aircraft was launched.

"A group strike using precision weapons has been conducted in the area controlled by the Jabhat al-Nusra [Jabhat Fatah al-Sham] terrorist group in Idlib province, from where the missile was launched against the [downed] Russian Su-25 airplane. According to radio intercepts, as a result of the strike, more than 30 militants of Jabhat al-Nusra were destroyed," the report by the Russian Defense Ministry said.

The strike followed the downing of a Russian Su-25 aircraft in the area.

"The plane was flying over the Idlib de-escalation zone," the military stated.

The Defense Ministry revealed that according to preliminary information as to the possible cause of the downing, the plane may have been shot down by a man-portable air-defense system (MANPAD).

READ MORE: Next in Line: What al-Nusra Should Now Fear the Most in Its Idlib Stronghold

The Russian Defense Ministry stated that the pilot managed to eject from the aircraft and survive, but was killed during a subsequent battle with terrorists.

According to the ministry, Russia and Turkey, peace guarantors in Syria's Idlib de-escalation zone, are undertaking all possible efforts to return the body of the killed pilot.

During the two-year-long military operation in Syria, Russia has lost four airplanes and four helicopters. According to Russian Deputy Defense Minister Yury Borisov, modernized Su-25SM ground attack aircraft are being used in Syria.

The Su-25 attack aircraft is designed to destroy small-size mobile and fixed ground objects, as well as low-speed air targets.

The incident took place on the territory controlled by the Jabhat Fatah al-Sham terror group amid an ongoing military operation against them conducted by Syrian forces.

Among various terror groups operating in the area, there is also Hay'at Tahrir al-Sham (HTS), an umbrella terrorist group spearheaded this year by the former Al-Nusra Front. While some countries, such as the United States, have flagged HTS as a terrorist group, Russian officials continue to refer to the Salafist jihadist terrorist organization by its former Al-Nusra moniker. Al-Nusra was the official Syrian branch of al-Qaeda until 2016, when it ostensibly split from the world's most well-known terrorist network.

000000
Popular comments
Pilot was executed on the spot, RIP, tons of US supported cutthroats will meet their 72 male goats in hell now and Russian Strela MANPADS will probably now turn up in places US wish they wouldn't