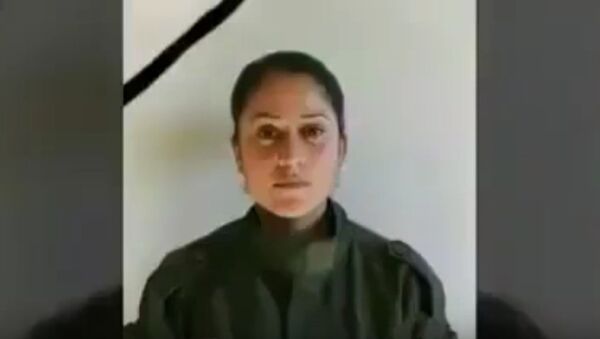 Global condemnation has erupted after videos posted online revealed the mutilation of a body belonging to a female member of the Kurdish Women’s Protection Units at the hands of Turkish-backed militants in Syria.

Turkish-backed Syrian militants are accused of recording the horrific abuse of the corpse of a female member of the Kurdish Women's Protection Units, according to reports, although some have claimed that she blew herself up to avoid capture.

A staunch ally of the US-backed coalition fighting Daesh in Syria, Kurdish forces are considered terrorists by the increasingly autocratic and nationalist regime of Turkish President Recep Tayyip Erdogan, who authorized the Syrian invasion.

An official with the Kurdish fighters in Afrin identified the woman killed and mutilated as Barin Kobani, a highly-trained soldier who fought with the US in driving Daesh from the northern Syrian village of Qurna, according to The Guardian.

US-backed Kurdish fighters in Syria have blamed "terrorist allies of the enemy Turkish state" for the mutilation of Kobani.

The UK-based Syrian Observatory for Human Rights monitoring group claimed that it gained access to the graphic video file from a member of the Turkish-backed Syrian militants fighting the Kurds in Afrin.

In the video, militants stand around a young woman's badly mutilated corpse in Qurna, a Syrian village near the Turkish border.

Alongside the Kurdish community, many around the world have reacted with outrage, particularly after a portrait of a smiling Kobani was posted online next to an image of her destroyed body.

"Barin [Kobani] did not surrender. She fought to the death," declared Women's Protection Units spokesperson Amad Kandal, who promised revenge for Kobani's death and abuse.

"This kind of behavior will only serve to reinforce our determination to resist until victory," the Kurdish spokesperson added, cited by The Guardian.